Proof, Walker turned down Medicaid Expansion for Purely Political Reasons, and believe it or not, he wants to Run on his Record?

Here’s what Walker clearly said recently to USA Today that utterly betrays his ruthless self-centered plan to advance his career:


Walker, vice chairman of the Republican Governors Association, warns it could be dangerous for governors who were elected with the help of Tea Party supporters to facilitate the law. After all, opposition to Obamacare drew many of those voters into politics.

"I think for the handful who have taken it, on other issues they've been very strong," he says. "If that was the one blemish in their minds, maybe alone it wouldn't (hurt), but if it's part of a series of things, quite possibly" it would.


While Walker supporters insist that liberals stop their whining and accept the election results, they don’t seem to feel the same way about Obama or the Constitutionality of Obamacare:

Walker says, "Clearly, there was an overall sentiment in the country and state-by-state of frustration that government had grown out of control, particularly after the health care act and other things," he says.

This is the most ridiculous statement yet, and easily Walker’s Achilles Heel. I can't believe he's even bringing this up: 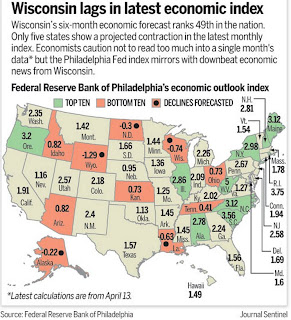 "For all of us who were elected for the first time in '10, running again in '14 - if we can show that things are markedly improved both economically and fiscally in our states, I think it's a pretty compelling case going forward."

Walker continues to blame the protests for poor consumer demand and slow business growth. I’m still mystified by that. Does he really think businesses put themselves on hold until they were sure Walker returned as governor? This was an austerity agenda, stripping public employees of their discretionary cash:

He blames the disruption of the recall election and the uncertainty it created for small-business owners and other employers. "We lost about a year, a year and a half of time of really aggressive job growth because of their reaction and the recall," the governor says, sitting for an interview in a gazebo overlooking the river. "I hope things continue to pick up. The good news is that we're accelerating."

In the middle of Walker's third year and he’s “hoping things continue to pick-up?” The map above doesn't’ show acceleration.
Posted by John Peterson, Democurmudgeon at 6/07/2013 12:31:00 AM