This bomb just dropped; The UW Regents, without talking to the State Superintendent, dropped internet service for the UW which may effect a majority of school districts and libraries. They now have to contract with the private sector who once didn't give a damn about providing affordable service. And my guess is, they still won’t. School districts can’t afford this one, all thanks to Republicans who won’t be happy until they can privatize the entire UW system and get it off the books.


WSJ (no link yet): Republicans included a provision in the 2011-12 budget that requires the UW to disengage with WiscNet by July 1, 2013...Walker plans to sign (a new provision) Sunday (in the 2013-2014 budget that) would give the System another six months.

As you can see, if government can do something cheaper, to save taxpayers money, Republicans are against it. Big business needs government handouts in the form of Republican laws that cost taxpayers more to pad their donors bottom lines. Here’s Tony Evers reaction: 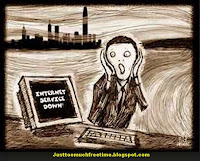 following statement regarding a last minute decision by the University of Wisconsin Madison to break up a long-standing partnership for network services. “I am astounded and disappointed that without any consultation with representatives of public schools or libraries, including me – a Regent, the University of Wisconsin has potentially left 70% of school districts and 95% of public libraries in Wisconsin without an internet access provider. Now, hundreds of school districts and public libraries are facing the loss of internet access, and, in an era of reduced budgets, an unknown added cost that could run into the millions. To make matters worse, they are left trying to get all this sorted out before the start of school. Is this some new version of the Wisconsin Idea?”

The UW had their weak kneed reasons:


At the direction of the Chancellor….the following is the University’s response to AT&T’s letter of June 6, 2013, protesting the University’s award of a contract for Network Services to WiscNet.

WiscNet’s intitial equipment cost was 85% less than AT&T; AT&T was significantly higher that both WiscNet and CenturyLink for its (system). WiscNet provided far more detail in its response than AT&T.

The UW had no reason to withdraw their contract with WiscNet, but did for these reasons:


Business and political considerations, including the potential for ongoing appeals, litigation and legislative changes, have created uncertainty to our campus operations…such uncertainty is not compatible … begin transitioning to the operation of our network.

In our last update ... yesterday we learned the University of Wisconsin System Administration and Board of Regents have asked UW-Madison to withdraw this award to WiscNet, citing “business and political considerations” and their need to “absolutely ensure that (the UW) can accomplish (their) educational and research missions without interruption”. Isn’t it a sad day when political pressures from telephone company lobbyists keep us from working together?  It’s frustrating, yet fascinating.  Seriously.

A costly to taxpayer decision is just another victory for Republicans, who aren't shy about the privatization win:

Speaker Vos Statement on UW Severing Ties with WiscNet: “The UW System is making the right decision regarding its relationship with WiscNet. A free market based system will be a win for students, taxpayers and private enterprise in Wisconsin. The legislature will work with the university to facilitate their transition.”

REP. KNUDSON APPLAUDS UW-MADISON DECISION “I am hopeful that this signals a new, more open and transparent approach to the issue by the UW System and the Board of Regents. We look forward to constructing a system that meets the needs of our neighborhood schools and libraries.”

Because the current less expensive system was so bad?