One Party Rule not the same for both Parties.

The Washington Times article starts with the false premise that both parties are the same:


The Colorado and North Carolina state legislatures were unusually productive in 2013 … Polar opposites ideologically, Colorado Democrats wielded the same unchecked control this year over state government in Denver as North Carolina Republicans did in Raleigh, with predictable results.

Then they trotted out the false equivalencies. In reality, the Democrats are pushing a populist agenda based on issues receiving high polling numbers, and Republicans are passing laws that appeal only to their base in safe gerrymandered districts. They don't trust us, so instead, they would rather attack voters, labor, local control and push gun crazy vigilantism. 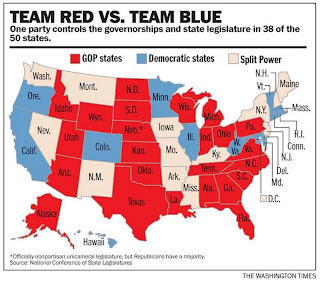 In Colorado, the upshot was a legislative session marked by sweeping new laws on gun control, election reform and benefits for illegal immigrants.

In Raleigh, the legislature proposed a record 18 amendments to the North Carolina Constitution, including measures aimed at curbing the government’s power of eminent domain, an anti-union right-to-work provision and an expansion of concealed-carry gun laws.

As the conservative Washington Times puts it;

The concentrated power has sparked backlashes in Colorado and Minnesota on the left and Wisconsin and Michigan on the right.

Poll numbers support tax increases on the wealthy and the elimination of corporate welfare:

Yet that compares somehow to the Republican wrecking ball to every Democratic law that came before:

“Republican-led Indiana sliced income taxes and Alaska slashed oil taxes,” said a June 10 report in Stateline.org, which tracks trends at the state level. “Kansas is paying for an income tax cut by hiking sales taxes (the rate will still decline next year).

Midwestern Republican governors such as Scott Walker of Wisconsin and John Kasich of Ohio have had their agendas challenged as they moved to cut the power of public-sector unions.

The first Republican-dominated state government in more than a century in North Carolina is now the target of so-called Moral Monday weekly protests in Raleigh, led by liberal clergy members, teachers unions and environmentalists.

The difference: Republicans ante up lots of money through special interest groups during elections. Democrats hit the pavement and protest. Still hurting from the anti-war protests of the 60’s, Republicans resent descent, and are happy to push an authoritarian one party government, vilifying the Democrats as outcasts:

State Sen. Thom Goolsby, New Hanover County Republican, dismissed the protests as “Moron Monday” in a biting op-ed this month. “The circus came to the State Capitol this week, complete with clowns, a carnival barker and a sideshow,” he wrote in the Chatham Journal.

The same has been said about the protesters in Madison, as if the First Amendment doesn't apply to Democrats. And you know, maybe under their authority, it won't apply.