Walker Spending Taxpayer Money Recklessly, with little or no blowback.

The state GOP will be infiltrating local communities in a get out the vote effort pushing a few empty words; "Freedom" and "opportunity." It's insulting to see the word "freedom" tossed around and manipulated for political purposes, suggesting we lost it somewhere along the way.

And because Scott Walker and the Republicans can't raise taxes and fees, they've decided to borrow money, give tax cuts that aren't be paid for, and reject our own federal tax dollars for Medicaid's expansion.


So...just to make it perfectly clear to teatard’s and low information conservative voters who just might stumble on this blog one day, what Walker will cost them thanks. Hint: They’re not protecting their taxes.

This section of a Journal Sentinel article spelled it out: 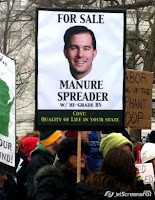 The governor's proposal will cost the state almost $150 million more in the next two years — and potentially more than $450 million through 2021 — than if the state had accepted the federal money available under the Affordable Care Act, according to estimates by the Legislative Fiscal Bureau.

That includes $30 million in state dollars for the $73.5 million added to the proposed state budget by the legislative budget committee to compensate hospitals for an expected increase in people without health insurance under the governor's proposal.

The governor's proposal means that an estimated 80,000 to 90,000 people who would have gotten coverage through Medicaid will need to buy subsidized health insurance through the exchange.