Hannity all smoke and Mirrors......

Sean Hannity asked a "large" group of African-American conservatives (who by the way objected en masse to Hannity's use of the term African-American. Nice way to make your case Sean), why black voters support the Democratic Party.

Funny thing though, as you can see by the mirrored wall to the left, this group of black conservative pundits and radio hosts looks much larger now, thanks to the Fox News' prop department. These black conservatives would rather deceive the public with mirrors than tell the truth; conservatism's anger, hate and envy crosses all racial lines. 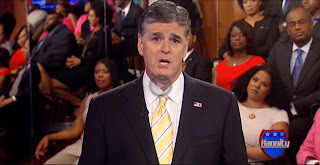