Madison Mayor Paul Soglin is going on the offensive.

Soglin’s attacking Citizens United in a way that every Democratic mayor in the country should be aware of, and adopting. You don’t often see this kind of well thought offensive taken on by liberal politicians. 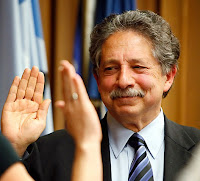 While Democrats can only sit on the sidelines watching Republicans dismantle decades of progress, Soglin thinks it’s time to turn the tables.

Soglin not only wants to hold businesses accountable for their political actions, but also for backing anti-consumer laws that harm local economies.

Politifact: "Legislative action since Gov. Scott Walker’s election — including Act 10 in 2011 curtailing the collective bargaining power of most public workers, and more recently, legislation setting levy limits for municipalities and restricting cities’ powers in tenant-landlord law — got Soglin wondering if companies supporting Republican causes would rather lobby against the city or do business with it," the Cap Times story said. It added: "He’s betting that exposing such activities might prompt some companies to curtail them."

That’s what campaign disclosure laws are all about anyway. Make big money contributors publically stand up for what are now secret attempts to undermine our democracy. Pretty clear and pretty smart.

The ordinance, which requires people or entities contracting with the city for more than $25,000 to disclose contributions to certain advocacy groups ... receiv(ed) 4-0 approval from the Board of Estimates.

The ordinance aims to limit vendors doing business with the city from providing anonymous contributions to advocacy groups listed under section 501(c)(4) of the IRS. Several types of contracts are excluded from the requirement.

Soglin didn’t just come up with this idea, he was pushed into it:

Soglin (took) action after a mailer from a political action committee blasting 6th District Ald. Marsha Rummel showed up just days before the April 2 election with no indication of who financed it … maybe this was associated with a business in the 6th District,” Soglin said. “That was enough to prompt me to say we’ve got to do something.”

Greater Madison Chamber of Commerce President Zach Brandon … opposing it … questioned whether the problem the ordinance aims to fix exists in Madison.

Isn't that amazing? Business interests are always suggesting “what if” scenarios to push their deregulation, anti-consumer agenda. How many times have we asked Republicans about their legislative “solutions looking for a problem?” Voter ID is one example.

The same businesses who began threatening employees if they voted Democratic...they’re now crying fowl over something like this?

“The Chamber does not support this proposed ordinance … the potential to chill political engagement and the wrong message it sends that politics are important in the Madison procurement process,” he said.


But Mike McCabe, executive director of the Wisconsin Democracy Campaign, an elections watchdog group said “It’s an important and very necessary response to the Citizens United decision,” McCabe said. “My experience is that practices that start at the federal election level do filter down to the state level and then eventually to the local level.”

By the way, Politifact's story went something like this;


The Wisconsin Institute for Law & Liberty … contends the liberal mayor’s proposed ordinance is unconstitutional and violates "a bedrock principle of our democracy that government cannot play favorites among citizens, including public contractors, based on their political beliefs." The proposed ordinance, "according to Mayor Soglin, is intended to discourage contributions to organizations with which he disagrees." Is that what Soglin has said is a goal of the legislation?”

"I think it would be a good idea to know if the bidders are working against the interests of the city. It is simply the idea that sunshine is good … if they’re supplying the city while they're behaving like the Koch brothers, it would be good for the public to know it. It’s a bit ironic when someone wants a contract with government, yet supports organizations that hate government and try to make it inefficient."

The proposal would require disclosure of donations to groups of any political stripe -- it does not single out conservatives or Republicans. Rather, the ordinance specifies that firms and minority owners disclose donations made to tax-exempt 501(c)(4) advocacy or "super PAC" organizations operating in Wisconsin the prior two years.

All perfectly fair and legal. Just like the recall petition blacklist used by conservatives to attack citizens and business owners?
Posted by John Peterson, Democurmudgeon at 6/12/2013 12:02:00 PM