Dumb Ron Johnson has been in a breathless panic since he started running for the Senate. He’s only gotten worse since, imagining the end of American via Obamacare and massive deficits that have actually declined.

I've said it before; Republicans need to find a way to wipe out the deficit they created first, then come back for a serious discussion.

But Dumb Ron Johnson chose instead to treat everybody like clueless knuckleheads, by first offering to help Sen. Tammy Baldwin understand budgeting, something she did as a Representative, and then suggested Obama “understand the size of the problem” before spending one more dollar.

The latter is now catching on as a Republican do nothing talking point, believe it or not. Imagine this:

Politico: Johnson made a presentation to (the White House) on behalf of Senate 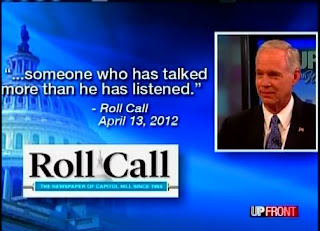 Republicans on how they view the deficit problem. And the GOP senators urged the White House to begin a public campaign ... Rather than typical budgets that show 10-year windows, Johnson laid out government revenue and spending projections covering three decades. The Wisconsin Republican argued that using a 30-year window would depict a more accurate picture of the growth of entitlement programs like Medicare and Social Security. One source pegged the budget gap growing from $70 trillion to $120 trillion over the next three decades, depending on the assumptions.

30 year projections are notoriously inaccurate, manipulative and missing future congressional action. But to Dumb Ron Johnson, it's all too real. Seeing the economy swirling down the drain, his “sky is falling” world of catastrophic consequences must be understood by all.

So what would Johnson do? Where is his detailed plan for entitlements, spending and deregulation? He’s got nothing, and he admitted it, while praising Obama:

“I think [the White House officials] were hoping for us to lay our solutions on the table — more looking to that as opposed to the definition of the problem,” Johnson acknowledged. “Let’s face it, the 10-year budget window is pretty favorable in terms of minimizing what kind of solutions we have to look at.”

That’s Dumb Ron Johnson, talking up Obama’s economy.  But Johnson’s catchy “we must understand the problem first” lunacy is catching on:

But “We have suggested to the chief of staff — [what] we need to do is to agree on the size of the problem,” said Sen. Lamar Alexander (R-Tenn.)

“We’re not negotiating anything; we are discussing,” said Sen. Johnny Isakson (R-Ga.) “We are making progress on getting some understandings.”