The rotting corps we know as the Republican Party showed us their really bad side today, when they took on food stamps in the farm bill. Never mind the corporate welfare in the bill with no real means test, it's conservative envy of those getting food stamps that needed addressing, forcing them to jump through government regulations...hey, I thought they didn't like regulations?

First, Massachusetts Rep. James McGovern just tears the Republicans apart in this clip that shines a light on some of those insulting hoops. He doesn't let up:

Rep. Joe Crowley is another Democrat who took the SNAP Challenge, where lawmakers lived on $5 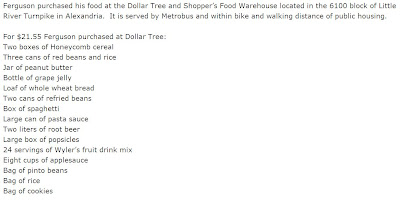 If the list to the right isn't pathetic enough, Stockman went further:


Stockman’s communications director and agriculture policy advisor, was able to buy enough food to eat well for a week on just $27.58, almost four dollars less than the $31.50 “SNAP Challenge” figure. “We can cut the proposed benefits by an additional 12.4 percent and still be able to eat for a week.”

The theme again for Republicans...mocking the poor.  Here's Chris Hayes: