Walker: "I don't have any problem with ultrasound!!!"

Well then let's have unnecessary penis probes for Republican men suffering ED (Hey, these guys are making up for something carrying guns). I'm sure I heard one female Democrat make that suggestion the other day on the floor. 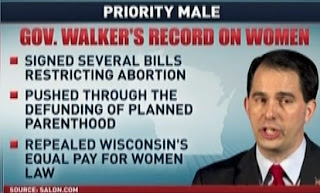 The ultrasound bill was only one of many successful attempts by Walker to attack the women of Wisconsin.

Isn't it just amazing how he's gotten away this stuff for so long without doing damage to his standing with strong conservative voting women in the state.