Democratic State Sen. Kathleen Vinehout accused of "Theatrics" after Talking about her Own Sexual Assault.

Sen. Kathleen Vinehout is tough, wonkish, and speaks her mind. That’s something Republicans men don’t like, and it may have strengthened their resolve to pass mandatory and unnecessary ultrasounds tests on women.

reading letters from several constituents who opposed the ultrasound bill. “The idea of — quote — small government is in direct conflict with big government Republicans sticking their nose my vagina,” one voter named Suzanne wrote. “How can we get the conservatives — mostly men — to quit blaming women, many times girls, solely for unwanted pregnancies?”

Vinehout said that she had been touched by the letters because she had also been a victim of sexual assault at the age of 15. “And if we truly want to make abortion rare, Mr. President, why are we defunding Planned Parenthood?” the Alma Democrat asked.

Prude defender of sex abstinence education and defunding Planned Parenthood, big government Sen. Mary Lazich explained how she wants to know what’s going on in a women’s womb, and can’t imagine anyone else not wanting to nose around for purely political purposes.

Our authoritarian overlords discounted the minority objections, when Lazich blamed Democrats of doing something only Republicans do so well, cheap “theatrics.” So Vinehout’s own sexual assault at 15 is apparently, all show? 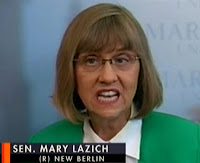 Republican state Sen. Mary Lazich, who sponsored the legislation, encouraged her fellow lawmakers to ignore “the theatrics surrounding” Vinehout’s presentation and then launched into an impassioned speech of her own.

Lazich, who like her fellow Republicans, won’t work this hard to save the life of someone who needs health care. Where’s the concern hypocrites? Sen. Jon Erpenbach was right, this forces their religious beliefs onto everyone else. Real constitutional scholars.
Posted by John Peterson, Democurmudgeon at 6/12/2013 05:35:00 PM