For Down-on-their-luck White Men, The Daily Caller is a gathering place for conservative victimhood.

What is it about the sick conservative mind that justifies everything through vilification, false premises and blame? How do these people survive in a nightmare society envisioned by our founding fathers,

when they could simply improve on the idea via fiction and theories concocted by Ayn Rand and Milton Friedman?


Example: Matt K. Lewis is our insight into a philosophy of whiplash policies that flip flop over time. (Full disclosure) I'm a white guy too. Years ago the Bizarro version of Superman lived in a world opposite ours, with upside down values and contradictory statements that seemed funny at the time. Now I'm thinking it was an early look at conservative men. Bizarro's even had ironically, a pure white skin color: 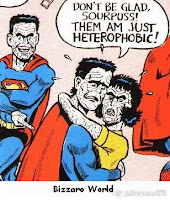 White men, especially, can’t complain. What I mean is that nobody is sympathetic to them. There is a good reason for this. Historically, they have won the lottery. Thus, there is no release valve, no politically correct way for them to express their understandable anger at a society that seems to have let them down. What is more, they are regularly mocked and portrayed as Homer Simpson-like buffoons by the media. There is no anti-defamation league to complain when men are portrayed as idiots on TV commercials, movies, etc. They are supposed to suck it up … as more and more high-achieving women are remaining single (party because there aren’t enough highly-educated men), we can expect problems, including gangs, the rise of fringe radical groups/militias, etc., lower birth rates, more suicide, etc.

See how women are to blame? And see how “dependent” these strong conservative men were on a government entitlements that favored them for centuries? Nothing is their fault either. The thought of improving themselves and taking the challenge is not even a consideration. Instead they shore up their insecurities with a right to carry guns, joining a gang or militia and "Going Galt."

Lewis offers his solution in his aptly titled piece: Going Galt: Why men are boycotting marriage, fatherhood and the American Dream. If that wasn't funny enough, he went on to explain the surreal:

Dr. Helen Smith’s new book, Men on Strike explains, a man might expect to be king of the castle. Now days, she says, he might be relegated to a “man cave” in the basement, and — if lucky — granted missionary position sex once a week. Or he becomes, as she told me, “some shlub, carrying around a flowered diaper bag.” But if the benefits of marriage have declined for men, the downsides haven’t. Men who marry can expect to pay disproportionately for a divorce, even if the wife cheats.

“[T]he new world order is a place where men are discriminated against, forced into a hostile environment in school and later in college, and held in contempt by society,” she writes. ”Maybe there is no incentive to grow up anymore,” she continues. “It used to be that being a grown-up, responsible man was rewarded with respect, power and deference.” Now, not so much. Making matters worse, men cannot voice frustration. “Men who complain are either wimps or misogynists or both,” she writes.

Poor men. Finally, two videos you'll love and hate. My conservative friend pointed the first one out to me last week with Megyn Kelly, but I never used it until now. The second clip is from this weeks Hannity, where radio stooge Bill Cunningham proclaims to Tamara Holder "know your role:"

(Helen Smith) sided with Erick Erickson and Lou Dobbs in their skirmish with Megyn Kelly on Fox News.

From Hannity, "know your role:"