Amazed at Scott Walker's Popularity, Presidential Talk? You're not Alone....

I don’t have to add a thing:

San Francisco Bay Guardian Online: Anyone that believes that merit and achievement in 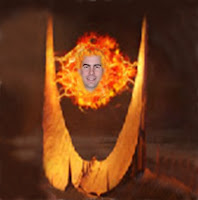 governing mean anything at all should stay away from Wisconsin.

The Badger state, cheesehead central … Also home to perhaps the most dismal head of state in the US, Scott Walker. Walker's claim is that unburdening the state of the pensions and bloated salaries would set off an economic wave of growth--and did it?

No. The state plummeted in job growth and real wages declined at twice the national level.

One would think that given the state's atrocious fiscal performance that Walker's ambition to ascend would be over. Wrong again--he is considered a viable presidential candidate in 2016. How can this be?

It's simple: To win over the Republican base, the most important quality a candidate can have is a gleeful sadism when it comes to people of modest means plus a directly proportionate propensity to salad toss the very wealthy (Walker was pranked figuratively doing same to the nation's big bankroller of lunacy).

If what turns your base on is pointless cruelty, then you really have become a "crazy clown cult". Venerating a complete failure is exhibit A, case closed.