Mayor Nickels: "Republicans...putting a price tag on everything and value on nothing."

I thought this speech at the Democratic Convention in Oconomowoc, by Manitowoc Mayor Justin Nickels, kicked ass. Nuff said:

WisPolitics: Nickels said the Democratic party is the party of compassion, which 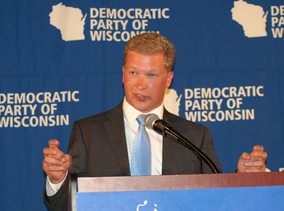 presents challenges when running against Republicans who he said have an easy time appealing to those concerned about the price of government rather than its value.

Republicans and the Tea Party, he said, are “putting a price tag on everything and a value on nothing.”

He said that in a society where people increasingly care about themselves more than others, “Republicans can shout at the wind and tell us that overpaid public employees and high taxes are the problem” and that they can cut taxes and grow the economy.

But Democrats, he said, are forced to explain the value of supporting things like education and public transportation that may provide opportunities for others, rather than just themselves, to succeed in society.

He said radical groups tell Democrats they need to read the Constitution. “While they are living in a world focused on "me," Democrats are focused on "we"--“we the people,” he said to applause.