Dumb Ron Johnson doesn't like making difficult decisions. The Farm Bill is one of them. He can’t shake the “food stamp” problem he says costs too much at the expense of doing more for farmers. Like doing what for farmers Ron, since government handouts aren't possible when you’re trying to make cuts, cuts, cuts?

But for Johnson, it’s always something isn't it?

Yet Democratic Sen. Tammy Baldwin stepped in, made decisions and took action. She helped pass the farm bill in the Senate: 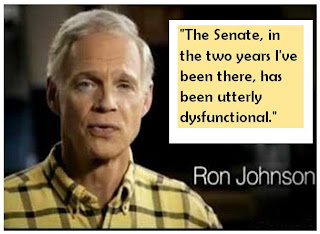 colleagues vote in favor of a new five-year farm bill on Monday. Tammy Baldwin called the measure, which passed in the Senate, a bipartisan piece of legislation that will help move Wisconsin's economy in the right direction.

"Wisconsin's family farmers have been an engine for our state's economy for generations," Sen. Baldwin said. "The Farm Bill makes important investments in our rural communities and supports an industry critical to our state's economy."

Johnson voted against it:


But GOP Sen. Ron Johnson doesn't feel the 'Agriculture Reform, Food, and Jobs Act' does enough to help farmers. He's argued for months that the program contains too much money for food stamps. "About 80 percent of the spending in the bill will be spent on the Supplemental Nutrition Assistance Program," Sen. Johnson said in a statement. "That is out of control … This bill is simply not targeted to help farm and dairy families dealing with over regulation, misguided federal policies, and weak demand brought on by terrible economic growth."

Several of the key provisions in this year's farm bill include providing training and access to capital to new farmers; creates manufacturing jobs by growing bio-manufacturing to replace oil-based products; increases the ability for farmers to sell what they grow in their local markets; and expands export opportunities for American farm products.

Dumb Ron Johnson walked away, leaving Tammy Baldwin to pass and include the following additional aid:

Baldwin says the Specialty Crop Block Grants will help support research for crops like cranberries, potatoes, ginseng, and cherries. The Beginning Farmer and Rancher Opportunity Act to provide tools for farmers including technical assistance and training programs, as well as matching funds for savings accounts and lower loan rates. And the Rural Energy Investment Act will provide funds for renewable projects including anaerobic digesters and investments in biofuel crops.  Meanwhile, the Dairy Security Act was also part of the Senate's version of the farm bill with the controversial market stabilization program in place.

What’s not to like Ron? Oh yeah, food stamps for those still effected by the Great Recession thanks to the "free market." Baldwin helped both sides, standing with farmers and added:


Chippewa Herald: “The bipartisan farm bill makes the most significant reforms to farm programs in decades,” Baldwin said. “It ends unnecessary subsidies like direct payments, eliminates duplication, and streamlines programs to save more than $24 billion.”

She pointed out that the average age of U.S. farmers is about 60. “Many of them inherited or were able to buy into a family operation. That’s getting tougher and tougher these days. That’s why we have to start investing in a new generation of farmers and ranchers,” Baldwin said. “The farm bill provides training programs and helps new farmers access important tools, land, and capital to get their operation off the ground.”