I fear for my life with these crazy gun sons-of-bitches walking around threatening everyone!!!

The NRA has always worried that one gun law would create a slippery slope of endless regulations restricting the use of firearms. 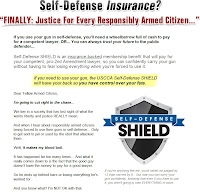 It was projection. Now just the opposite is true. Since passing the concealed carry law, an endless stream of gun crime immunity laws are being created, replacing common sense laws that have been on the books for a century. Giving someone the right to carry a killing toy and dick extension, doesn't make them a protected class, unless idiot is now on the list. It's called the castle doctrine.

It mostly just makes them an asshole. Hey, thanks for bringing society down to the level of a slug.


jsonline: People who shoot intruders in their homes, businesses or vehicles would get powerful new legal protections under a bill scheduled to come before the Assembly ... The proposal also would entitle shooters to recover the costs of defending themselves in any civil suit against them if the court found the shooter was immune to lawsuits under the castle doctrine. Courts would not be able to consider whether the person using deadly force in their home, business or vehicle had the opportunity to flee instead.