Here are a few more examples of level headed conservatism, the Walker way, as the recall campaign roars ahead. Try to remember each example as a debate point for future condescension from the far right wing, who always seems paint liberals as violent commies out to destroy the country. Pure projection: 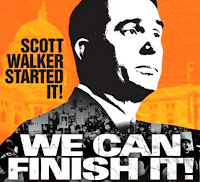 Riverfalls Journal: A 53-year-old rural River Falls man is a suspect in a petition-shredding incident last Wednesday, Nov. 23, after 5 p.m., in front of EconoFoods on Main Street. After he pretended to sign a recall for Gov. Scott Walker, the man allegedly jabbed at the petition form with a pen and then ripped the paper. He was confronted by recall petition volunteers. As he walked away, the man gave his name as “George Washington.” One witness snapped photos of the George Washington suspect’s car and license plate as he drove off.

Police arrived right after he left ... they have identified the man. He is to be questioned Tuesday, Nov. 29, by a police investigator and could be charged with a felony by the Pierce County district attorney.

A little while back I posted a story about another shredding (burning) scheme, this time from Operation Burn Notice. In an exhaustive bit of investigative journalism, here's an update from the Examiner's Bill Schmalfeldt in Elkridge, Maryland:

If one is searching for a "brain" behind Operation Burn Notice … Monday evening, a confidential informant told the Examiner that an individual named Jason Grossman of Prescott, Ariz., may be the driving force behind the Facebook page.  The informant suggested that Grossman posts online under the alias "Aaron Burr" on two websites, "Evilconservatives.net" and "Evilconservatives.org"

(UPDATE: At 2:45 pm, the Examiner received an e-mail from someone identifying himself as "Aaron Burr."


I'm not sure why you would think my name is Jason Grossman. He's the guy who owns madshirtz.com. The only reason I even posted anything is because I for one, am starting to lose my patience. See, we did all this stuff weeks ago. Literally weeks. Want the run down? 1.) Some idiots on facebook got nasty with some friends of mine. No big deal, it's facebook. 2.) Friends of mine mentioned they were gonna' mess with the FB idiots. We say we're shredding petitions, the other side goes out and buys sigs from kidz and pays them in cigarettes. We say we're gonna' date rape a petition, the other side goes out and harasses people they don't like. I'm smacking seriously stupid people around on the net and it's boring the Hell out of me. I'm just a hired gun for this brouhaha. I could care less what Wisconsin does.

The Examiner replied to his e-mail asking for a direct answer this time and asked what he meant, precisely, by "I'm just a hired gun for this brouhaha. I could care less what Wisconsin does."  We asked who was paying him, and how much.  He replied quickly.


I wish I could divulge the name of the client who hired me, but due to the confidentiality clause in the contract, I simply cannot. However, it ain't the tea party, the GOP, Scott Walker or anybody you've ever heard of. It's just some random guy. He liked my writing style and wanted to have some fun. Simple as that. Haven't you ever ghosted an article?

Again, conservative projection. Check out the whole detailed story at the link above.