Threatening? Intimidating?
Watching this hysterical apartment busy body reminded me of a few people I met as a Census taker. I actually found those snoopy tenants fascinating, a modern day neighbor like "Bewitched's" Gladys Kravitz. But their protective side can be a little overbearing and paranoid: 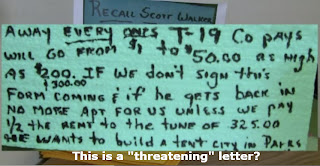 A tenant at the St. Peter federally-subsidized, low-income housing complex on the northwest side wants answers, after Scott Walker recall signs with intimidating and threatening language were posted in her building. The signs, which are almost entirely inaccurate, warn tenants that not signing a petition to recall Scott Walker, will result in increased medical co-pays, and higher rent, saying they'll end up living in tent cities.


But a "threat?" The media took the bait, by a frantic individual's wild rendering of the note, and that's the issue here. Joanne Halada's panicky interpretation is only one persons interpretation and she's entitled to it. Further investigation turned up zero:

Joanne Halada contacted FOX6 after discovering the signs; FOX6 spoke with fellow tenant Valerie Stephonik, who says she put up the petition because a friend named James convinced her to do it. FOX6 called James, who said he only gave the petitions to Valerie, and denies putting up any signs, or targeting voters in low-income housing.