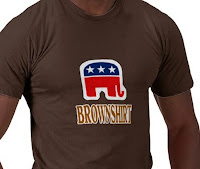 Playing for all the marbles, despite a failed state economic policy, Republicans have resorted to election intimidation…bullying and threats.
Scary, better watch out! Having lost the battle to win the hearts and minds of Wisconsin voters with a jobless jobs plan and an attack on workers, Republicans have a better way; tricks.
Using the tactics of a badly conceived reality show, conservative zealots will be snapping pictures and recording conversations at their door, just like a small army of Andrew Breitbart/James O’Keefe wanna-bee’s.

AP: Republicans have launched a website where reports of petition fraud can be submitted as the drive to recall Gov. Scott Walker from office prepares to launch.

The Republican Party of Wisconsin on Monday announced the website that is says is designed to protect the integrity of the signature gathering process. Recall supporters need to collect more than 540,000 valid signatures by Jan. 17 to force an election. Republican Party executive director Stephan Thompson says the website will be a place where people can submit videos, recordings, photos and incident reports related to petition circulation, which will in turn be investigated by party staff and retired law enforcement officers.

There’s something brownshirted about this whole idea.  Here's what Daily Koz wrote:

Nice to see the Republicans are so concerned with election integrity—I mean, someone could hire someone from out of state to collect signatures, a convicted felon, perhaps, or maybe the signature collector could trade alcoholic drinks for signatures. The Republican Party did all of these things in that last round of recall elections. Pot meet kettle.