I didn't know who was behind the blue fist, but now I do. 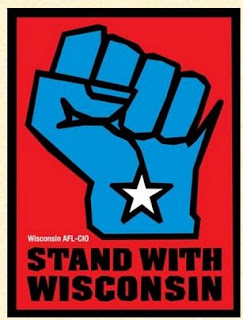 AP: An Appleton native is the creator of the iconic "blue fist" graphic in the shape of Wisconsin used in spring protests at the state Capitol.

Graphic artist Carrie Worthen graduated from the University of Wisconsin-Milwaukee. She now lives and works in Los Angeles, but she kept in touch with members of the AFL-CIO and, in February, the union asked her to take the germ of the fist idea and make it stand out.

"To me it needed to be bold and clear and loud and simple," Worthen told Wisconsin Public Radio. Worthen said it's been overwhelming to see thousands of people use her design to protest the policies of Gov. Scott Walker and Republicans in the state Legislature.

She said the fist has long been used by labor and civil rights activists. She expects it to be used in the effort to recall Walker, and said similar designs are being adopted by the Occupy Wall Street movement.

"The slogan that we used, 'Stand With Wisconsin,' it was this sort of call to the nation to stand up along with Wisconsin," Worthen said. "I think it's great that everybody finally is with this Occupy stuff and you're seeing fists everywhere. And I think that's great because it means that standing up and fighting injustice is mainstream."

Worthen said she was not paid for her work on the blue fist design.