Bad news for ObamaCare doom and gloomers!!! According to Voxdotcom:


1. Federal spending on Obamacare subsidies will be 20 percent lower than expected over the next decade, according to new Congressional Budget Office projections released Monday morning.

3. CBO also reduced its estimates for how many people the exchanges will cover within the next decade from 25 million to 24 million.

Remember, ObamaCare (ACA) is just 9% of all health care, and deals with the individual market so far.

Most American get their coverage from their employer. Employers are very happy get help from the government. Small businesses get help too. And then there's Medicare, with more government help

Like the clueless tea party protesters holding signs, "Keep your government hands of my Medicare," Americans just don't get it. Small government Republicans may want to rethink what they'r wishing for, or pay the price. Voxdotcom: 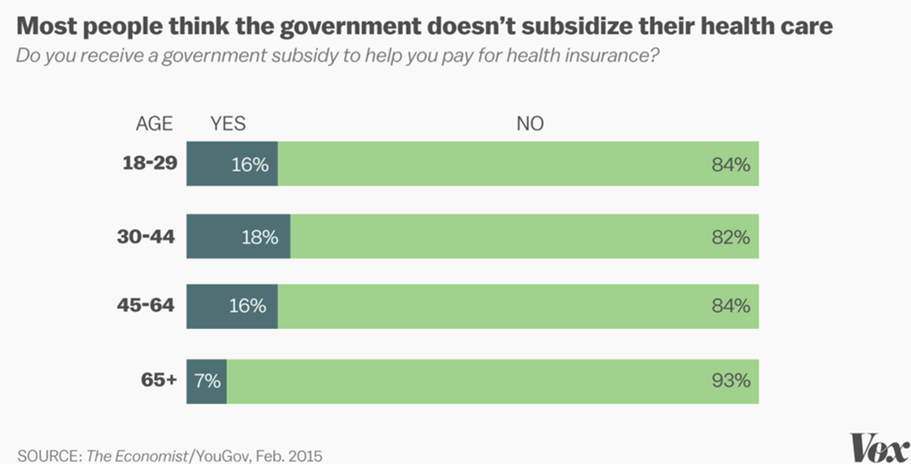 The way people in the policy community see it, this is totally backwards. Almost everyone who has health insurance in the United States gets help from the government to afford it. For the elderly, that's Medicare. For the disabled and the poor, that's Medicaid. For full-time workers it's the tax subsidy for employer-provided health insurance.

Some of what you see in this poll is a simple misunderstanding — older Americans either don't know what Medicare is or mistakenly believe they have "paid for" their benefits with earlier taxes. But Americans who get insurance from their jobs are also benefitting from a massive government program. A program whose existence is hidden from sight but is nonetheless quite real and substantial.