Paul Ryan takes ObamaCare innovation and makes it his own? Not so fast.

I couldn't believe what I was reading.

Paul Ryan’s not very original, and by my own estimates, not to smart either. In his recent editorial describing how he would privatize Medicare, he outright stole an ObamaCare feature. A feature he’s been trying to kill for years. Ryan even stole the failed marketplace idea and tax credits. And you thought Republicans hated ObamaCare?

And no one is calling him out on his hypocrisy, because politicians and the media don’t understand the Affordable Care Act. Ryan might have gotten away with it, but I’m here to expose this ghoulish phony.

Ryan is taking credit for “managed care,” a reform idea that's now an integral part of ObamaCare, the marketplace, and Medicaid expansion. Yes, he's really trying to steal it, without ever saying "managed care:" 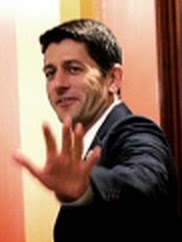 "Our plan would strengthen Medicare by encouraging better care and rewarding doctors for better results. Right now, Medicare pays doctors for every single treatment they perform … It rewards quantity, not quality, of care. We would … depend more and more on results. Our plan would … reward doctors who met performance goals and improved seniors' health. Over time, Medicare would reward quality over quantity, and seniors would get better care because of it … our plan would discourage unnecessary doctor visits and give seniors an incentive to seek the most effective care."

1. Wow, what an idea!!! If only the states tried doing this…

States are increasingly turning to Medicaid managed care as a key .... in many states under the Affordable Care Act.

2. If only insurers began to adapt to all the changes in managed care...

It’s important to understand that today, just about all health coverage plans are some type of “managed care” plan. Gone are the days of traditional “fee for service” … Under managed care plans pay doctors or hospitals directly … physicians may be paid a fixed annual per-member (“capitation”) rate, regardless of how many times the covered individual visits the physician. The health plan goal is to take away financial incentives to prescribe too much care.

3. If it sounds exactly like the Affordable Care Act...Ryan just loves to talk about "patient-centered health care," a tricky way to usher in privatization, and to say "you're on your own suckers," with no way for Americans to pay for their care. But the term means something completely different in the ACA:

TheAffordable Care Act is expected to impact access to care, change the way accountable care organizations are used. An ACO seeks to provide patient-centered treatment programs and manage the continuum of care across the healthcare delivery system, which includes everything from wellness to chronic disease.