This will be my second post on Paul Ryan's not-so-original reform plan for Medicare. This is from an article he wrote for the Kenosha News.

First, Ryan insists on pounding the idea of privatization with his cutesy “patient-centered” lie, a meaningless term where patients are still handed over to insurance companies. Yea, but the patient is at the center, or something like that right?

“Our plan would start to move us to a patient-centered system.”

Ryan's next revelation is already a part of Medicare and the Affordable Care Act. Ryan is embarrassing himself and showing everyone how little he knows about ObamaCare. It’s obvious he’s never looked into the current system; it's already transitioning doctors and hospitals into managed care plans. What he's describing accurately below, is the Obama plan, not his. 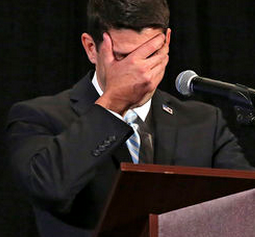 “Doctor payments would depend more and more on results. Our plan would set up one streamlined program that would reward doctors who met performance goals and improved seniors’ health. Over time, Medicare would reward quality over quantity, and seniors would get better care because of it.”

While Obamacare critics complain about deductibles, Ryan wants to create a whole new one for seniors. Because Medicare has co-pays and deductibles, they require everyone to have “supplemental” insurance (Medigap). Seniors on a fixed Social Security income will have to pay about $147 a month extra to insurers just to cover co-pays and deductibles (add to that the $105 monthly fee for Part B).

Ryan apparently doesn't think the price of supplemental insurance, $147 a month, is painful enough for seniors seeking care in our already costly U.S. health care system. He wants seniors to pay another fee of $147 per year so they shop more wisely. Ryan incorrectly assumes health care is a consumer product we shop for (and insurance isn't health care):

Our plan would discourage unnecessary doctor visits and give seniors an incentive to seek the most effective care. Many seniors have “Medigap” insurance — that is, a private plan that helps pay for costs Medicare doesn’t cover, like co-payments and deductibles. These plans insulate people from costs and, experts believe, encourage the overuse of healthcare. Beginning in 2020, this agreement would prohibit Medigap plans from covering the first $147 of out-of-pocket spending, so cost is once again a consideration in healthcare decisions.

That's right, seniors who've paid insurers for nearly 50 years don't understand the cost of insurance. Condescending comments like this should piss off every American. He's also not that smart either.