Idiots!!! Republicans crash and burn on every ObamaCare prediction, and still no apology? Now, about supply side economics...

Sorry for this long post, but it covers everything I've been collecting for a few weeks on the Affordable Care Act. All I can say is "holy crap" if the Supreme Court trashes the federal tax credit.

First: Business is now a part of the ACA marketplace. The reason you haven't heard anything about it is because businesses haven't complained one bit. 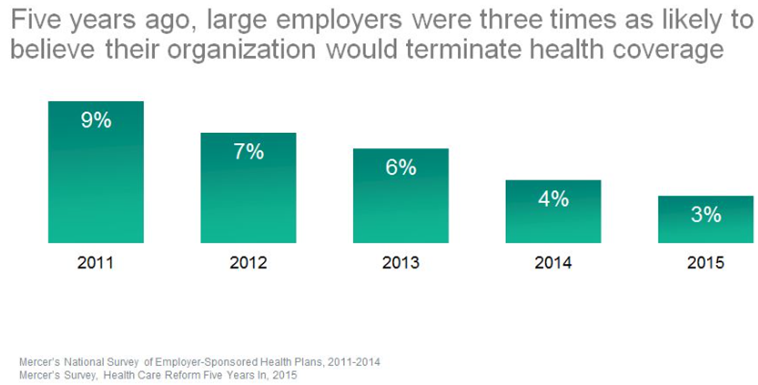 Five years after employers were considering terminating health coverage due to costs and other issues related to the Affordable Care Act, companies have largely changed their tune as fears have not been realized, according to a new analysis. Just three percent of employers are now likely to terminate health plans for active employees, according to Mercer, one of the largest employee benefits consultancies and a subsidiary of Marsh & McLennan MMC +0.61% Companies (MMC).

“The percentage of large employers that say they are likely to terminate coverage and send employees to the public exchange has fallen each year since the ACA was signed into law – from 9% in 2010 to just 3% in 2015,” Beth Umland, Mercer’s director of research for health and benefits, told Forbes. (See graphic) ...employers with 100 or more workers in January were required by the Affordable Care Act to offer 70 percent of their full-time workers coverage. In 2016, employers with 50 or more full-time workers have to start offering coverage. Employers see offering health benefits as important to keeping the best workers.

Failed Prediction #1: Americans won’t enroll in the ACA - among some on the right, this was a foregone conclusion – Americans wouldn’t trust “Obamacare.” We now know, of course, that the opposite is true and that millions of families have eagerly signed up for benefits through the ACA.

Failed Prediction #3: Insurers will want no part of the ACA system: This also proved to be the opposite of the truth, as insurance companies have been eager to compete for Americans’ business.

Failed Prediction #4: The economy will suffer terribly because of ‘Obamacare’:’ In reality, 2014 was the best year for American job creation since the ’90s; the unemployment has shown sharp improvement; and there’s literally no evidence that the ACA had an adverse effect on economic growth at all.

Failed Prediction #5: Even if Americans enrolled, they won’t pay their premiums: It was, however, completely wrong.

Failed Prediction #6: Even if people pay their premiums, the flawed ACA structure will send premiums soaring: This just hasn’t happened and the ACA model has proven to be quite effective.

Failed Prediction #7: The ACA won’t reduce the uninsured rate because it will only help those who already have coverage: This was a GOP favorite for quite a while, right up until the evidence proved the right had this backwards, too.

Failed Prediction #8: The ACA will lead to a “net loss” on overall coverage: This line was pushed by House Speaker John Boehner (R-Ohio) for a while, As it turns out, his actual beliefs were ridiculously wrong.

Failed Prediction #9: The ACA will lead to higher deficits and a weaker fiscal footing for the nation: The GOP assumed the non-partisan budget analyses were wrong and proceeded to tell the country the law would make the deficit larger and “bankrupt” the country. According to the CBO, however, Republicans got this backwards, too. In fact, the overall price tag of the ACA is now smaller than previously projected.

ACA critics were wrong about the “death spiral,” “rate shock,” young people wouldn’t enroll, assertions that Medicare patients would suffer. None of these predictions – literally, none of them – stood up to scrutiny. None of the prominent figures in Republican politics who were wrong are willing to take responsibility for their failed predictions … to explain their abysmal predictive powers and fact-free critiques (or offer a credible alternative).

Check out the BS in this fund raising letter from Gov. Scott Walker, who has no idea... 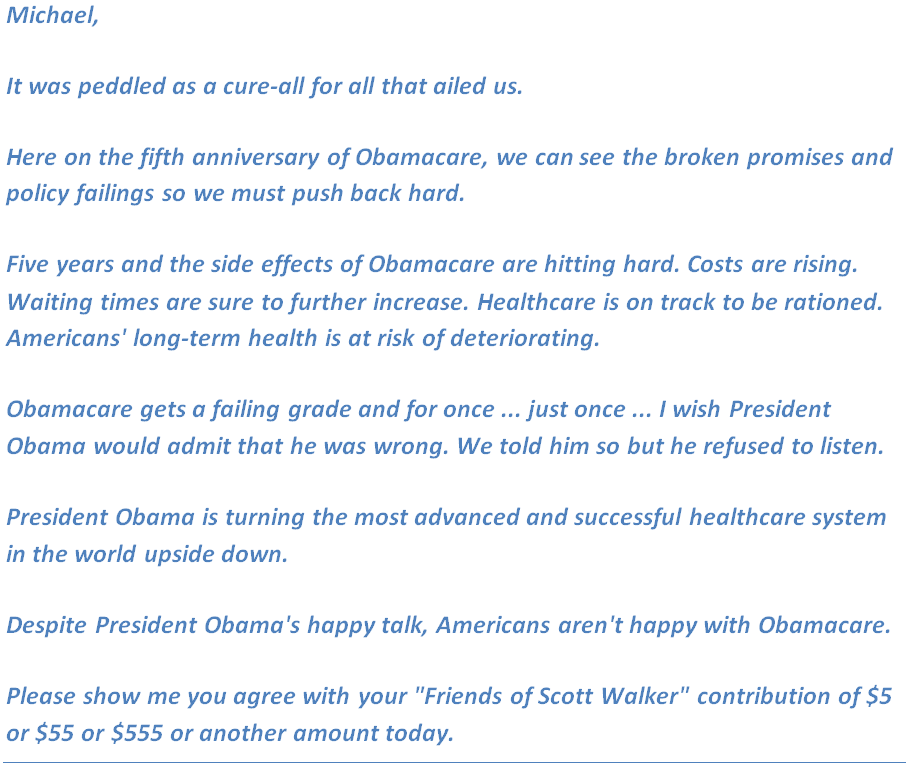