What is it about Scott Walker's sleepy eye'd non-answers that lulls voters into trusting him? 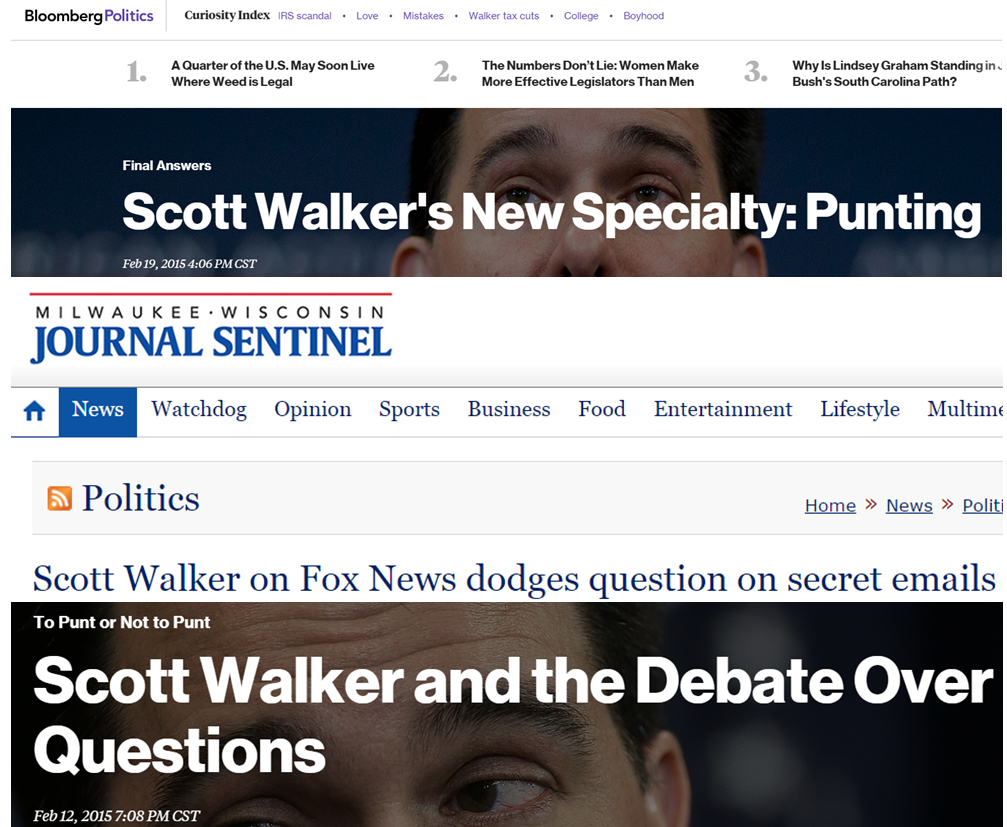 Cap Times: Gov. Scott Walker navigated the Iowa Ag Summit with ease … fielded questions from GOP mega-donor and ethanol industry executive Bruce Rastetter … on ethanol mandates going into the event, Walker's ultimate answer was well-received.
Stressing that he supports a "free and open market," Walker added that he would be willing to "go forward on continuing the renewable fuel standard."

That may have sounded like an answer to Iowans, but it's not:

As any Wisconsinite can tell you by now, that’s a big "no" on RFS, but Iowans don’t know it yet. Can't you just see big oil smiling over that one.

And while Republicans recoil in horror at the brutality used by other foreign governments against their own people, these pocket constitutionalists are nonchalantly committing their own atrocities, some unconstitutional, by withholding medical care and food from those who need it. Punishment, pain, starvation, watching people die from preventable diseases; that's considered a sign of strong leadership by our right wing authoritarians:

The crowd responded the most enthusiastically to Walker's comments about food stamps, applauding when he mentioned a provision in his proposed budget that would require recipients to be enrolled in a job training program and to be tested for drugs in order to receive benefits.

Walker is smartly marginalizing the 1st Amendment right to redress the government. He called it "intimidation," and compared it to the likes of ISIS. He arrested protesters here until the courts stopped him, declaring it unconstitutional. Not a peep from the tea party pocket constitutionalists.

Just as sinister is the devaluation of Americans caught between jobs, like it was their fault. In Walker's world, we're just a workplace commodity. Walker calls the unemployed bench sitters with their "feet up." Perhaps they're drug addicts too and need to be tested:

The governor compared public benefit recipients to football players sitting on the sidelines during a game. The ones that get called in by the coach, he said, are the ones standing nearby with their helmets on and mouth guards in — not the ones sitting on the bench with their feet up.

Walker's record is clear; he nearly bankrupt Milwaukee County and failed to create jobs there. He's currently cutting taxes despite mounting deficits, borrowing, higher debt service payments and lousy job growth. The Walker backed mismanagement gave the GOP a reason to dismantle years of public investments in our parks and universities. This is what success looks like to them. Voters loved it in Wisconsin, and they're loving it in Iowa:

Coreen Trost, who volunteered at the event, echoed Boettger's feelings about Walker. "He’s not scared off by ugly politics. He’s been through a lot and has held strong."

I'll end on this bad omen about Walker, on what could be the most imperial presidencies of them all if he wins:


Paul Pelletier, a non-profit fundraiser from Cedar Rapids who attended the Walker event, said he's torn between Jeb Bush and Walker. He said he finds Walker authentic.  "He's got something that a lot of others don't have: he's just a regular Joe. I'm attracted to that and I think people are pretty tired of imperial presidencies."