Reporters have had 4 years to brush up on the ins and outs of the individual health care marketplace, which makes up only 9% of all people with insurance. The Affordable Care Act is an attempt to control those runaway costs, offering lower group rates for individuals. Reporters are still clueless, so the public is led to believe Republican talking points that are never challenged, and don’t make any sense.

Here’s my look, point by point, at Jeb Bush's recent plan for reform: 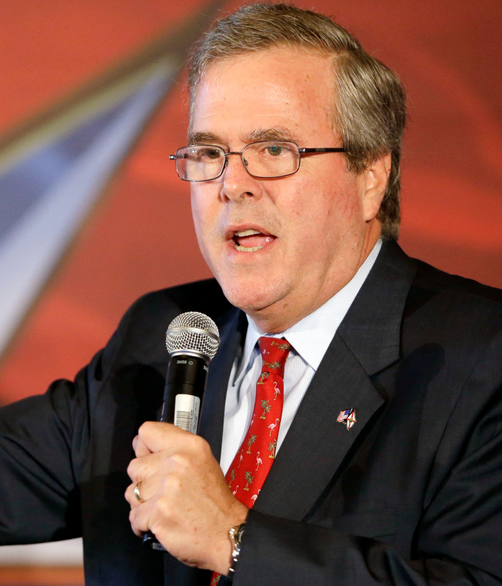 "The greatest job suppressor in the so-called recovery that we've gone through is Obamacare," Bush said in a Q&A at the 2015 Iowa Ag Summit.

Does this sound like “suppression;” impressive job creation month after month (nearly 295,000 in February), and declining unemployment numbers (5.5% in Feb.). The only downside to the Obama recovery? Republican governors are using it to make themselves look good, when in fact they've done nothing, and in some cases, made things worse:

"And I think replacing Obamacare with a market oriented approach that is — where local and state input starts to drive the policies away from this top down system."

From there the potential Republican candidate offered … government-subsidized catastrophic coverage. "…relief (for) families in this country that if you have a hardship that goes way beyond your means of paying for it, that you have a — the government is there or an entity is there to help you deal with that."

A new and not so horrible idea? Except it makes people go broke first, never lowers the cost of care, never deals with why people are forced into bankruptcy in the first place, and leaves the plan open for future reductions by a more austere administration.

Think about it, junk policies ("insurance you can afford") will push more people into this government paid for catastrophic safety net, straining the federal budget dramatically.

I hope reporters consider the above major issues when confronting big talking Republican snake oil salesmen about their private free market plan for health care. There’s a reason why every other industrialized country in the world never picked a for-profit privatized system. It has nothing to do with socialism. It has everything to do with the repugnant and morally vacuous idea that someone would even think of profiting from the sick and suffering.  Not in America.
Posted by John Peterson, Democurmudgeon at 3/07/2015 12:28:00 PM