I've been blogging about health care lately because Republicans are trying to give the impression they have a plan to replace the Affordable Care Act if the supreme court knocks down the federal exchanges.

Their plan is the same old plan they've had for years, minus many of their previous positions now included in ObamaCare. While no civilized industrial country has a free market plan, and there’s a good reason for that, Republicans are ready to gamble our lives away proving their theory works.

Republicans have been pushing the false premise; Health care is a consumer product.

Dumb Ron Johnson made that very clear the other day: 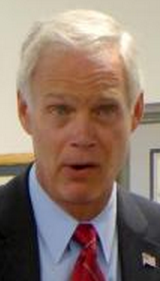 Sen. Ron Johnson said this weekend that the best replacement for President Barack Obama’s Affordable Care Act is free market competition. “We've separated the consumer of the product from the cost of the product,” Johnson said. “We pay for insurance — we don’t pay for the products and services that insurance covers.” He claims that moving the funding of health care services to third party payers prevents free market price controls from working.

The other false premise is just as insulting: People just don’t understand how expensive health care is. That’s right, there just aren't enough car washes and bake sales to help save kids without insurance at your local elementary school, or that the majority of bankruptcies are due to medical event. And employees don’t really notice their checks getting smaller as they pay more for their employer coverage. The public just doesn't get it?

Even worse, they promote self-rationing, which is supposedly better than insurance or government rationing?

The senator pointed to health savings accounts as an example of how health care could be handled in a more free market-like system.

The public is wary of Johnson’s cluelessness:

High risk pools cost people even more money than regular insurance. The pools pay for all the risk insurance companies don't want, with taxpayer support and higher premiums for anyone with insurance. So technically, we're all paying for it, while allowing insurers fatter bottom lines.

Here's the scoop on "high risk pools" that should make any conservative angry, because I know liberals are:

1 - Established by state governments to serve the medically "uninsurable" population … helping to keep the individual insurance markets viable for companies to continue to compete in. (me - seriously, dropping people to keep companies in business and profitable)

2 - Generally, the programs operate as a state-created nonprofit association. (as defined by Republicans, this is government run)

3 - All state risk pools inherently lose money and need to be subsidized. While the individuals in risk pools pay somewhat higher premiums, roughly 50 percent of overall operating costs need to be subsidized. Subsidy mechanisms also vary from state to state -- some states assess all insurance carriers; others provide an appropriation from state general tax revenue; some states share funding of loss subsidies with the insurance industry using an assessment of insurance carriers and providing them a tax credit for the assessment, or other states have a special funding source, such as a tobacco tax, or a hospital or health care provider surcharge.