Slippery Scott Walker exposed, again!!! He really can’t answer a question honestly. You have to wonder if he even knows what he really thinks.

What I can tell you is the Time article below is the closest thing to comic relief you'll see this week.

Wisconsin media created this monster and is to blame for letting him get this far. 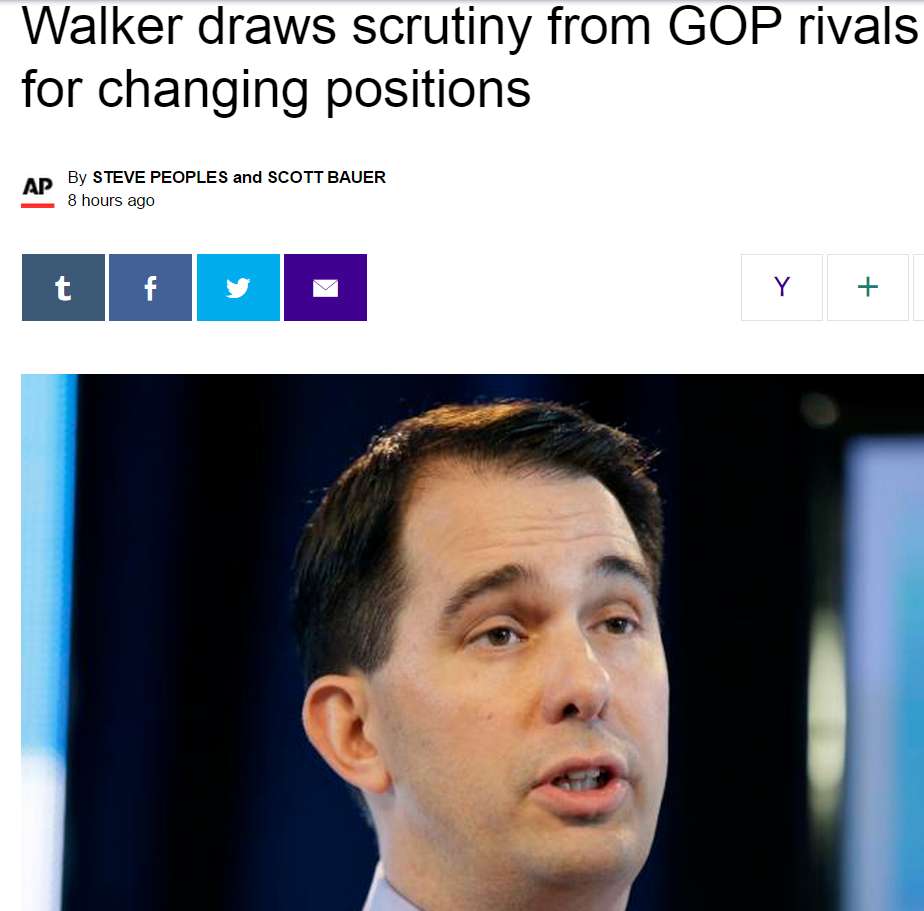 Wisconsin Gov. Scott Walker rejected the “flip-flopper” label Saturday after he shifted his position on immigration reform. “Just a narrative from the other campaigns that are frustrated with the fact that we've got a strong reputation of keeping our word.”

Supported Right-to-Work, he just called it Act 10: “My point is, I’m not pushing for it.”

Walker said claims that he had changed positions in other areas “ridiculous.” “I've always been a supporter of Right to Work, I was a sponsor of it,” Walker said. “I gave 300,000 union workers in my state the right to work four years ago, and I just signed it into law.” But for years, Walker had no interest in pushing legislation that would prohibit agreements between businesses and unions that require employees to pay union dues. “My point is I’m not pushing for it,” Walker said during his re-election campaign last year. “I’m not supporting it in this session.”

Walker really meant he wanted a 20 week abortion ban? “They’re taking an ad out there…” The campaign ad had nothing to do with the 20 week ban, and more importantly, Walker deceptively said he would leave it up to "a woman and her doctor:"

Walker has also come under scrutiny on his commitment to opposing abortion … his 2014 campaign ad said he supports “legislation to increase safety and provide more information for a woman considering her options. The bill leaves the final decision to a woman and her doctor.” Walker told reporters, “My position’s consistent on that. They’re taking an ad out there that talked about what the law did in the state which was endorsed by Wisconsin right to life.”

Walker loved Common Core before he was against it: This isn't just tea party pandering. Walker's trying out a new scheme to neutralize his flip flops by saying he's just "listening to the people." Really, since when do leaders like Walker listen to the people, especially after seeing how he ignored hundreds of thousands of those same people protesting his decisions?

On education, Walker’s first budget funded the implementation of the Common Core standards, now anathema to the GOP base. Walker has since backed away from supporting the standards ... Asked what the difference is between changing his mind and flip-flopping, Walker said the politically damaging charge shouldn’t apply when politicians are responding to voters.


“I think the key is if you've listened to people and you have a valid argument for why you've done it—we've laid out exactly what we've done—but I think people want strong leaders and they want leaders who’ll listen to the people,” he said.


Walker, who is on record opposing Ethanol mandates in Wisconsin, said last week in Iowa that he supports maintaining the Renewable Fuels Standard, before gradually phasing it out. Asked about the discrepancy, Walker said, “I didn’t enact it in Wisconsin. My position was about Wisconsin and my position was clear. What we’ve done in terms of what we said in Iowa was pretty clear as for going forward. Eventually we want the standard phased out, but right now it needs to be in place for Iowa.”

..."for Iowa," because he needs their vote!!! His online consultant had already tipped Walker's hand.