Even the Club for Growth was frustrated by Walker word salad non-answers!!!

If you thought Scott Walker’s word salad non-answers were strictly geared to the mainstream media, you’d be wrong.

A Politico and CrooksandLiars piece recently documented how Walker’s carefully memorized non-answers didn't go over well with the Club for Growth, a major dark money contributor to Republican campaigns. After all, what’s to hide? 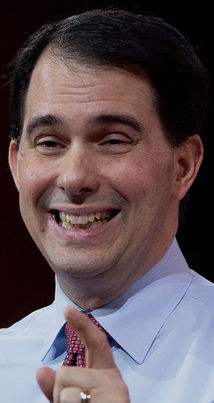 Frayda Levin, a member of the Club for Growth’s board of directors who was moderating a question-and-answer session, told Walker that he left donors unimpressed at a meeting in New York earlier this month. That private session came one day after another controversial Walker event where Rudy Giuliani declared that President Barack Obama does not love America.

“To be honest, the feedback was you were not prepared to speak about foreign policy. So can you tell us what you’re doing to prepare for foreign policy should you run for president?”

He mentioned having breakfast with Henry Kissinger…was that enough to qualify? Walker was serious. Walker's bubble world handlers have filtered his view of himself:

“That’s interesting because, actually, a number of columns were written that said just the opposite,” he said. “They said they were surprised by how well prepared we were to talk about foreign policy. So I don’t know who. Maybe it’s somebody different, but I read two or three different columns from New York publications that said just the opposite. They said they were surprised for a governor.”

It’s almost funny how the national media picked up on this Walker strategy when our own statewide media never mentioned it once. Liberal bloggers did, but as the media would say, we’re the dicredited “left.”

The Club for Growth deserves every frustrating moment after frustrating moment trying to nail Walker down on anything. If they haven’t noticed by now, Walker is a bomb dropper. A guy too afraid to debate his ultra-right wing philosophies in public, were voters might just begin to understand the consequences.

On domestic policy, Walker gave vague answers about whether the Dodd-Frank financial reform law should be amended or repealed, along with what changes he’d make to the tax code. The non-answer bothered the moderator, so she gave him another chance.  Are you just not that aware of what’s happening with Dodd-Frank?”

“Oh, no,” Walker said. “I understand the concern. My point is I’m going to lay out a whole plan not just on this but a whole series of things should I choose to be a candidate for president.”

Asked about what changes he’d make to the tax code, Walker promised “exceptionally detailed plans” down the road.