It won’t be long before major Republican donors will have their names prominently displayed at the entry gates of our pristine state parks. What better way to look like you care. WE Energy Park? MG&E State Trail? WRA State Park? Ashley Furniture Park? Walmart Peninsula Park, AFP Park?

DNR Secretary Cathy Stepp made the strangest case for what appears to be inevitable:

"So we could see ... state park brought to you by ATC?" Sen Jon Erpenbach asked Stepp.

Stepp said. "We're not looking at that right now but we'll be talking about that."

Stepp repeated the standard Republican line...excuse; "we've got a budgeting problem here." If Republicans knew how to budget, and stopped handing out tax cuts that deplete state revenues, we wouldn't have a problem. Stepp believes corporate sponsorship won't change the the unique state park experience. How can anyone be this clueless or a sellout? And when the sponsorship changes, what happens, we change all the state maps? WKOW and WISC:

The DNR is also paying extra close attention to frustrated developers and devil-may-care hunters who haven’t seen a park or backyard they don’t want to exploit or kill something in. And the $2 to $4 proposed price increase? That's BS too: 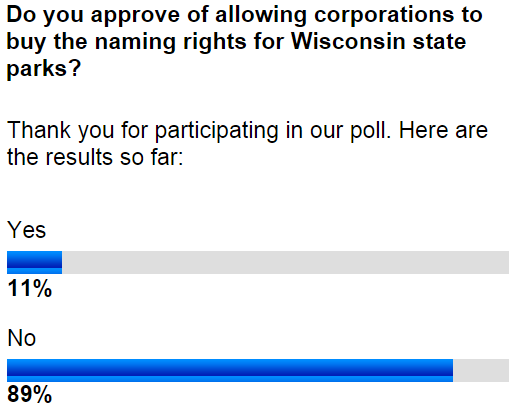 Stepp also said DNR is looking at the idea of implementing market-based rates for state campgrounds, which would mean more popular spots would cost more.

Stepp would appear to have a free hand in rule making, despite never having been elected. I mentioned that because normally Republicans are always whining about that, and because Sen. Luther Olsen noticed the hypocrisy:

WSJ: The DNR creates rules that interpret state laws on pollution controls, wildlife management and other matters. Stepp said turning the Natural Resources Board into an advisory council would cut down the time it takes for the agency to establish new rules.

Stepp said home builders, realtors and some sportsmen groups have expressed frustration with board decisions that couldn't be appealed as they could be if elected officials had final say.

Sen. Luther Olsen, R-Ripon, questioned how investing the board's powers in the department secretary would improve the situation, since the Legislature would still need to pass a law to change an agency rule it didn't like and Stepp is appointed by the governor.

"When is your election?" Olsen asked.