Does Scott Walker lack this much self-awareness? The media had already talked about the similarity between Hillary Clinton’s private email account and Scott Walker’s. So, what did the Walker campaign do? Stepped into the line of fire, that’s what. This is really beyond words: 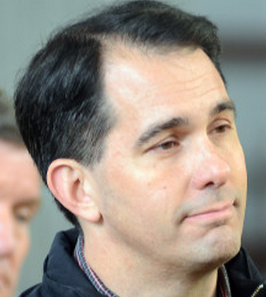 WSJ: Gov. Scott Walker's political non-profit slammed Hillary Clinton on Thursday for using a private email system during her time as Secretary of State, according to the Daily Caller. "Hillary Clinton’s potential evasion of laws is something she should answer questions about,” said Kirsten Kukowski, a spokeswoman for the political action committee Our American Revival, the Daily Caller reported. "Wisconsin has a strong open records law with a broad presumption of access to records and the governor has very specific policies in place in his office to assure that the laws are complied with fully."

Breathtaking. It didn't take long for Democrats to react…

Minutes after the conservative web site's story posted, the Democratic National Committee sent out an email criticizing Walker for using a private email system when he was county executive. The email also referenced reports that Walker aides set up a secret wireless router they used to conduct campaign business while on county time. "If Walker wants to talk about emails, let's look at his history first," the DNC said. The secret system was uncovered by an investigation into illegal campaign activities by Walker's staff that led to six convictions.

It’s Not Just Hillary: Scott Walker’s Email Controversy: The Wisconsin Governor kept a secret email system too, and some of his aides were found guilty of other crimes too. And it’s not over yet.

For anyone who might have forgotten, like my conservative friend who still doesn't think it was a big deal:

Gov. Scott Walker' John Doe transcript: Scott Walker must have known of private email, laptop system: At a secret hearing the day before the 2010 fall election, an investigator for the Milwaukee County district attorney testified that he had uncovered email evidence that Scott Walker, then-county executive, was likely aware of campaigning by his staff on county time using personal laptops and a secret wireless Internet router.

Here's the Fox News coverage and grilling from Chris Wallace: