Packers force fan to burn his unlucky couch? Yeah, so?

Under the file name “You can’t make this stuff up:”

Big deal! But possible jail time for a typically rabid fans response? Give me a break: 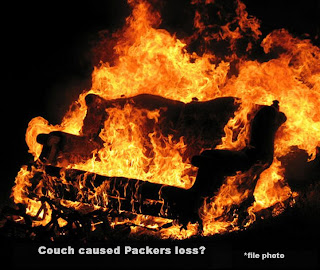 Waukesha Patch: Kurt Lufter, 22, was charged with disorderly conduct in Waukesha County Circuit Court. He faces up to 90 days in jail and a $1,000 fine if convicted of creating a disturbance when he burned a couch on his street as the game ended, according to a criminal complaint.

Police contacted Lufter, who told an officer that he was upset when he realized the Packers were going to lose. Lufter told the officer he had friends help him move the couch into the street, which is when he poured gasoline on the couch and lit it on fire. “(Lufter) indicated that once he started the couch on fire, he realized how huge the fire had become and he figured that police would be responding,” the complaint states.