Parents want weekly, monthly testing for their kid, the opposite of current policy.

The answer was right under my nose all the time. As a parent of two boys, one in elementary and the other in middle school, I’ve always found weekly and monthly testing, along with the teachers evaluation, much more informative than any end of semester or yearly test. Yet the direction states have taken emphasis end of year tests, which is well after the fact. We should stop this movement, especially after this eye opening report: 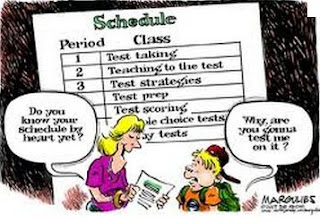 Education Week: Parents, teachers, and district administrators consider formative and interim tests far more valuable than summative assessments, according to a survey released Wednesday. And if state test results arrive more than a month after they were given, parents don’t find them very valuable, the survey found.

Whoa, that means this country is doing just the opposite of what parents and teachers want.

“What the data show is that parents, teachers, and administrators think that summative tests don’t give them the information they consider most valuable, and yet the pendulum has swung so far in that direction that there is a risk to other kinds of tests that actually help children learn,” said Matt Chapman, the president and chief executive officer of Northwest Evaluation Association, the Portland, Ore.-based nonprofit research and test-development organization that commissioned the study. “

The survey is right on target, and exposes a major flaw in the nationwide rollout of end of year testing:

Yes, it helps parents guide their kids progress, doh! And it’s not just the parents:

And what about the other critically important subjects recently tossed into the trash bin because of budget cuts and teaching to the test?

There was broad support among all three groups for assessing subjects other than mathematics and English/language arts, which are the two subjects states are required to report under No Child Left Behind. More than 80 percent of each group favors measuring students’ performance in science, and 70 percent or more favors doing so in history, geography, and government and civics. Testing in arts, world languages, and economics also drew support from majorities, or large minorities, of all three groups.