Is there anything Republicans won't S**t On? Propose Repealing Equal Pay Law!

Walker supporters need to come up with a reason why his legislative henchmen are plundering laws protecting everyone from harm to equal pay. Equal pay? Would you believe... 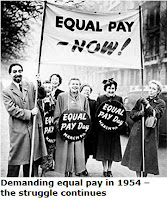 Wispolitics: On the heels of recent research that shows Wisconsin families gaining ground as a result of Wisconsin’s Equal Pay law, Assembly Republicans are poised to repeal it risking many of the gains Wisconsin workers and their families experienced since the law was passed in 2009. The state’s Equal Pay Enforcement Act was enacted just two short years ago.

Please, explain to me why paying women less will help the job creators? I'm listening. Republicans would let employers off the hook for workplace discrimination, by eliminating the penalties. So if the law is working, we should repeal it?

Research shows Wisconsin has been one of a handful of states that has seen the gap narrow. Legislative Reference Bureau: “Median female earnings as a percentage of median male earnings rose by 3.0% in Wisconsin between 2009 and 2010. Only four states had larger increases. Prior to the new law Wisconsin families were losing more than $4,000 per year due to women being paid less than men for the same work.