Like the title says, Rep. Paul Ryan made one hell of a miscalculation about Wisconsin’s hard hit auto plant closings. He also couldn't resist backhanding and abandoning the working class families that relied on those jobs. 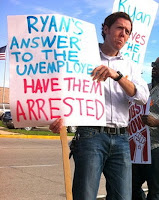 Sorry Paul, we still want to bring those jobs back, in a big way.

Charlie Rose asked Ryan about the auto bailout, which has particular resonance in Michigan. "Should that be an issue? And should the voters look at [critics] of the bailout and say, 'We had an economic bailout of the auto companies and look what happened? Profits are up and they're both doing well'?" Rose asked.

"Well, if you give any company tens of billions of dollars and wipe their debt off the books, I would expect them to do well," Ryan said.

The government never “gave” the auto industry money, but it did LOAN them some, which they paid back. Ryan supported those “bailouts,” although it sure doesn’t sound like cares much about it now.

Ryan also doesn’t have time to talk up GM and Chrysler’s new found success, and encourage them to return to Janesville and Kenosha, where workers there would welcome a chance at manufacturing cars again:

"I think it's a big issue in Michigan; I'm not sure that it's a big issue in the rest of the country. In my hometown of Jamesville and Kenosha that I represent, we lost our auto plants. So where we come from in auto country, we don't see them as great success stories because we had plant shutdowns irrespective of those bailouts."

And Paul Ryan is the guy we want out there promoting Wisconsin’s hard working middle class? It looks like Ryan has moved on from creating those kind of jobs.
Posted by John Peterson, Democurmudgeon at 2/29/2012 02:51:00 PM