I've said it before about Paul Ryan's obsession to killing Medicare just so he could balance the budget, he and the Republicans just don't care about the dyer consequences of their actions. Money and balanced budgets, that's all that matters. They are truly sociopaths. 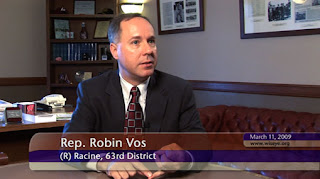 jsonline: The Legislature's budget committee approved $123.3 million in budget cuts … with the biggest chunk being taken from the University of Wisconsin System.

Remember how irresponsible it was for the Democrats and Jim Doyle to raid other dedicated funds? Republicans are exempt from those rules.

Gov. Scott Walker's administration … (made) raids on pots of state money to help balance the state budget, which still has an additional projected deficit of $143 million through June 2013 even after this latest round of spending reductions. The latest cuts include $46 million for the UW System this year, with $6.2 million of that coming from UW-Milwaukee.

Rep. Robin Vos (R-Rochester), of the Joint Finance Committee, said he believes the UW System will … weather the cuts. " Everyone - Democrat or Republican - would agree the budget must be balanced."

Sen. Bob Jauch (D-Poplar) said Republicans prioritized increased tax cuts at the price of state programs like public universities … "The impact of these cuts is going to be devastating for students."

But that’s not all, they’ve managed to weaken and sabotage so many other necessary expenses:

$227,000 : Government Accountability Board from implementing the state's new law requiring voters to show photo ID at the polls. Andrea Kaminski, of the Wisconsin League of Women Voters, said "I think it shows a pattern of disregard for voters."