I am so tired of this cooked up bulls**t by Republican blowhards about the price of gas at the pumps, I'm ready to explode. The title of the New York Times article below says it all.

The story itself never points out the futility of trying to control the price of oil on the world market. One little conflict, or over consumption somewhere in the world, wipes out any possible temporary savings.  OPEC will only decrease its output too. The NY Times is complicit in promoting this pathetic GOP con job.

But one of the biggest reasons we're seeing prices go up, as consumption goes down and supply is at an all-time high, is SPECULATION. Gas prices have nothing to do with "supply and demand" anymore, except when there is an actual shortage. Check out the AP article below that appeared just this week in the paper. Is the public so dumb that they'll go along with the "G.O.P. issue to Attack Obama" on gas prices? 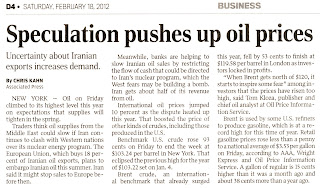 It's not like their plan to pull a fast one on the public is any secret. Check out the Times' own reporting:

In a closed-door meeting last week, Speaker John A. Boehner instructed fellow Republicans to embrace the gas-pump anger they find among their constituents when they return to their districts for the Presidents’ Day recess. “This debate is a debate we want to have,” Mr. Boehner told his conference on Wednesday … “Your constituents saw those reports, and they’ll be talking about it.”

We now know they're planning a con job, right? But in the media, it doesn't seem to matter. And even more insane is the idea that Obama wants to raise gas prices, all the while knowing the idiots at the Republican Party will trash him for it. Have we all lost our minds?

“They want higher energy prices. They want to push their radical agenda on the public,” Rick Santorum said at a campaign event last week, accusing Democrats of pushing alternatives to oil.

Newt Gingrich wrote that “gasoline prices are unacceptable. We can do better!” urg(ing) his supporters to sign a petition calling for a return to $2.50-a-gallon gas.

And talking points from the Republican National Committee(s) “Pundit Prep” document cited the national debt, unemployment and the price of gas as the three best ways to define the “Obama economy.”