Dumb Ron Johnson shows how dumb he really is!!!

This guy is a Wisconsin embarrassment. Dumb, dumb, dumb.

Social Security isn’t part of our deficit problem. It has over $2.5 trillion in savings, borrowed from yes, but a massive surplus. If Johnson has a problem with paying the IOU’s back, he can make his case as to why he wants to stiff Americans.

So our state’s stupid senator looked dumber than ever when this happened: 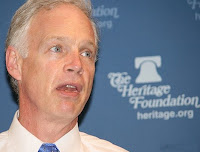 WRN: The US Senate Armed Services Committee takes a look at the 2013 proposed Pentagon budget, in which President Obama wants to cut $32 billion with additional cost trimming the following years. During a hearing Tuesday, Wisconsin’s Ron Johnson notes defense spending continues to shrink: from 43 percent in the 1960s, to next year’s 16 percent.

Johnson asked Defense Secretary Leon Panetta, why the President has no proposed plan to save Social Security, a program facing ballooning costs in coming years.

“If I was an OMD Director I could engage with you on that. I’m the defense secretary and that’s what I focus on,” said Panetta.