Is it any wonder conservative voters don’t know what to think anymore, when they’ve got talking heads, pundits and whack job radio announcers spewing bits of verbal garbage against the wall hoping some of it will stick.

Get this: Obama set the Republicans up on contraception. No, really. What’s next from these right wing loons; Republican outrage over contraception is their plan to save it, just like they want to save Medicare?

In my daily Newsmax update, was this profound conspiracy theory from the toe sucker himself, Dick Morris: 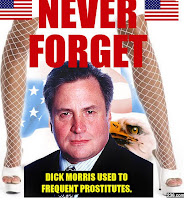 During a Republican presidential debate in January, moderator George Stephanopoulos peppered Mitt Romney with questions about contraception that seemed totally out of the blue at the time.

But in the wake of President Barack Obama’s move to mandate health insurance companies’ coverage of contraception, the motivation for the ABC newsman’s grilling of Romney has become clear, according to political pundit Dick Morris: It’s part of a plan to convince voters that Republicans will ban contraception.

Rush Limbaugh opined that Stephanopoulos — who Morris referred to as a “paid Democratic hit man” — was trying to get Romney to agree that states had the right to ban contraception, but “they failed in getting their sound bite. If Romney had said, ‘Well, theoretically yeah, states could,’ that would have been the ad” to use against him.