Wisconsin gets F grade for state science standards. After all the funding cuts, there’s nowhere to go but down for Walker.

Lost in the rush to pass out vouchers like dollar store gift cards, is the knowledge that parents can shop anywhere for anything that calls itself a “school.” 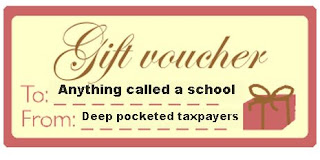 Almost all of the states that are privatizing education via the deep pockets of cash strapped taxpayers, allow parents to go out and buy anything that calls itself a “school.” This is the same public we see buying wrist magnets, abs machines and Eggies (I’m guilty of the latter).

That’s where we’re taking education? As Wisconsin Republicans trash one of the better systems in the country, they will also give themselves more ammunition as to why public education should be dismantled. A new report just piles on what is already happening now under Scott Walker:

Education Week: A new review offers a "bleak picture" of the state of state science standards across the nation, with just over half earning a grade of D or F. Only California and the District of Columbia were given a solid A. The Fordham report, issued last week, focuses on two main areas: "content and rigor," and "clarity and specificity."

The study comes as a major effort is under way to develop a set of common, "next generation" science standards. Twenty-six states are playing a lead role in crafting the new standards.

In explaining the F grade handed to Wisconsin, one of 10 states to receive failing marks, the Fordham report describes the standards as "simply worthless," saying "no real content exists to evaluate."

Patrick J. Gasper, a spokesman for the Wisconsin Department of Public Instruction, said that his state's standards were "considered exemplary" when released in 1998, but that they are not grade-specific. "…providing too much specificity ran counter to our system, where local control is important," he said.

Is Gasper saying “simply worthless” is good, and the excuse to do nothing via “local control” is better? And 14 years of curriculum research, evaluation and “innovation” doesn’t count?

Remember, voucher and charter schools are promoted by the right wing as outside the box “innovators,” and are in many ways critical to the effort to improve education and create competition.

So it’s not surprising that the Republican administration under Walker, the purveyors of bad government, would also contradict their position on local control:

But are they using the top standards template already set up in California and D.C.? Who knows:

Fordham report's Ms. Porter-Magee said "Those standards in both cases were very comprehensive, really outlined all of the important science content that students need to learn across all the disciplines and all the grades.