Major movements in our past have been historically captured through the eyes of courageous activist artists. But in Wisconsin, that history is being criticized and quashed by the authoritarian power of our ruling party.

I've read public educations biggest enemy and dumbest SOB in the assembly, Rep. Steve Nass' comments over and over here, and I still can't see one reason why the UW's School for Workers would cancel their art exhibit. Not one. Hello, we're recalling the governor over labor rights...? 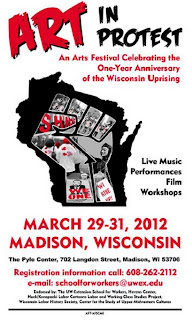 WRN: Republican Rep. Steve Nass, who has an often contentious relationship with the UW has gotten the UW’s School for Workers to cancel an “Art in Protest” exhibit that had been scheduled for next month. “The problem with it is that it would be funded with taxpayer dollars and that’s through the Extension,” says Representative Steve Nass. Nass charges the exhibit would have provided a one-sided view of last year’s protests at the Capitol, with UW Extension taking the side of protesters. “I did indicate to Extension that if they go forward with the event, any problems that arise from that, or any misbehavior by the protesters – which I certainly would expect, it would probably be very despicable – Extension would take ownership of that, and I will be watching.” “If the unions want to fund it, I have no problem with that.”

Is there anyway to recall this guy?