The Workplace is an Authoritarian Dictatorship! And so goes the Country...

We're beginning to understand the conservative voters love affair with fiery authoritarian politicians like Gov. Chris Christie, Rick Santorum, Newt Gingrich, John Kasich and the milder dictates of Gov. Scott Walker and Rich Snyder. It's also evident in the GOP/Tea Party driven agenda that they bring that authoritarian power back into the workplace nationwide, public and private. It's hard to understand how private sector employees can support such a self destructive policy, but I think it may have something to do with envying, and those who have something they do not. 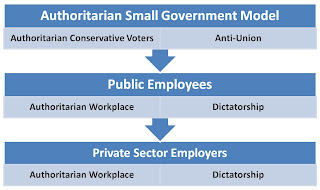 The labor movement is the critical anchor and enabler of democracy grounded on a notion of freedom. Most people have an intuitive understanding of what democracy means: rule by the people (as opposed to rule by the few or an elite). Yet, as Corey Robin so eloquently points out in his book on fear, Americans give up their individual freedom and democratic voice every single day they walk into work. The workplace is an authoritarian dictatorship, and we accept this as legitimate.

Now is the time to challenge that feudal relationship. We need to call into question the assumption that Americans believe democracy stops at the workplace door. If we would not stand for a despot to rule over us with impunity, why do we let the boss do so every day of the workweek?

When there is little outrage for the daily violations of workers’ liberty (employers fire workers illegally in 1 in 3 union campaigns for attempting to exercise freedom of association), our democracy is in peril. The decline of organized labor is directly linked to the rise in economic inequality over the last 40 years and the onset of a “Second Gilded Age.” The decline in union density coupled with the decline in the real value of the minimum wage explains one-third of the dramatic growth in wage inequality since the early 1970s.