An interesting legal question has been suggested by the Democratic Party of Wisconsin’s Mike Tate; after David Koch admitted that through his front group Americans for Prosperity, and he’s aiding Scott Walker in his recall election, are his ads illegal even though they don’t endorse the candidate? 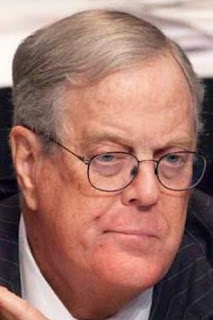 jsonline: In response to billionaire David Koch's statements over the weekend, Democratic Party Chairman Michael Tate is calling on 19 Wisconsin television stations to pull ads by Americans for Prosperity. Tate said Democrats were also filing complaints with the Internal Revenue Service and the Government Accountability Board.

Koch told the Palm Beach Post that he had spent a lot of money, via Americans for Prosperity, and intends to spend more to help Gov. Scott Walker fend off a recall drive. Tate said Koch's statements indicated that Americans for Prosperity was violating the law because nonprofits cannot directly advocate for a particular candidate or campaign. "The ad that has resulted from this illegal coordination, which mimics the language of Scott Walker's campaign, is therefore the fruit of the poisoned tree," Tate said.