Walker's history of phony outrage, hypocritical criticism of others.

I couldn't help passing this story of Walker hypocrisy on, via this blog post. 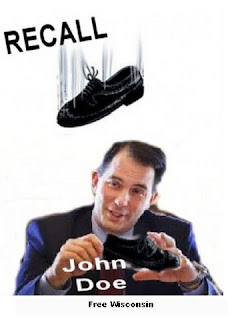 Back to 2006, when Scott Walker was Milwaukee County executive, (said) about Democratic Gov. Jim Doyle when a purchasing director in the state Department of Administration was indicted in what turned out to be a seriously flawed case initiated by a George W. Bush-appointed U.S. attorney.

When Georgia Thompson was indicted on charges that she steered a state contract to a longtime Doyle supporter, Walker, then running for the GOP nomination for governor, issued a stinging press release that accused Doyle of essentially harboring crooks in his administration.

Unfortunately, we have a governor that condones unethical and illegal behavior, Walker pontificated. The people of Wisconsin deserve better. Today's indictment provides further confirmation that the Doyle administration is damaged and must be removed from the Capitol. Governor Doyle needs to purge his administration of individuals who place politics and special interests ahead of the people of Wisconsin. Little can be said to underscore the seriousness of this charge. I am hopeful that the people of Wisconsin will allow me the opportunity to clean up Madison with the same fervor that guided my reform movement in Milwaukee County.

Thompson, who had been in state government long before Doyle was elected and was hired under a Republican governor, was surprisingly convicted of two felonies by a federal court jury, but the verdict was thrown out by an appeals court panel that found she had been wrongly convicted and the case against her was based on a serious lack of evidence. There doesn't appear to be any press release from the Walker camp related to that circumstance, however.

But that's not all. Going way back when Walker attended Marquette University, the droopy eyed governor appears to have a history of corruption:


According to the university's student paper, the Marquette Tribune, Walker violated campaign guidelines on numerous occasions when running for the student body presidency. The student paper called Walker unfit because he had distributed a mudslinging brochure about his opponent, and several of his campaign workers, upset with the endorsement of his opponent, took piles of the paper and threw them away.