The constitution means what Republicans think it means, or should mean at the time. 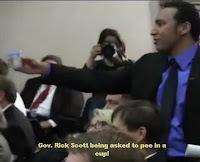 Foxnews: Conservatives who say welfare recipients should have to pass a drug test to receive government assistance have momentum on their side ... Mitt Romney saying it's an "excellent idea."

Nearly two dozen states are considering plans this session that would make drug testing mandatory for welfare recipients, according to the National Conference of State Legislatures. And Wyoming lawmakers advanced such a proposal this week.

Driving the measures is a perception that people on public assistance are misusing the funds and that cutting off their benefits would save money for tight state budgets -- even as statistics have largely proved both notions untrue.

"The idea, from Joe Taxpayer is, `I don't mind helping you out, but you need to show that you're looking for work, or better yet that you're employed, and that you're drug and alcohol free,"' said Wyoming Republican House Speaker Ed Buchanan on Friday.


Even after the courts have already ruled on the unconstitutionality of the law, the right wing oddly expects a different result. What is that the definition of...hmm, I wonder.


Supporters are pushing the measures despite warnings from opponents that courts have struck down similar programs, ruling that the plans amount to an unconstitutional to search of people who have done nothing more than seek help.