Who’s Teacher Karl McCarty, and why is he indoctrinating our kids? 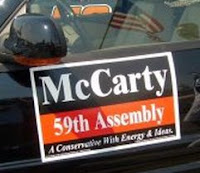 Its one thing to teach history and political science in high school, it’s another to bring in every Republican politician you can find to spew their conservative dogma to a classroom of high school kids. Are school administrators on board with this?

And how does a teacher rate to bring in dumb Ron Johnson, or Rep. Thomas Petri? How does a teacher plan field trips to GOP presidential debates and the Faith and Freedom Coalition Forum of zealot religious right wingers, with students from his class? I don't care if he did get permission, a tea party trek to Iowa is inexcusable.

Check out the pleasant conversation Ron Johnson had with a group of McCarty’s kids, in what can only be described as blatant indoctrination:

FDLReporter: (A) small group of students at Oakfield High School that studies current political leaders had a chance to interact with one Monday when U.S. Sen. Ron Johnson paid a visit. Karl McCarty, who teaches history and political science at Oakfield High School, invites politicians to speak with his class as a way to show students that politicians are human. Recently, the class hosted U.S. Rep. Thomas Petri.

Student Braden Ryan asked Johnson his thoughts about the future of small, family farms. Though there is nostalgia for survival of smaller farms, Johnson said some will be lost and others will survive. He likened it to the emergence of Walmart and Home Depot stores. Though people like the “mom and pop” stores, many people shop at the chain stores, he said.

Johnson likes to teach “creative destruction” to whoever will listen. Poor mom and pop, relegated to the dust bin of capitalism. And this wasn’t some nonpartisan message from Johnson:

Johnson discussed how Mitt Romney, Ron Paul, Newt Gingrich and Rick Santorum are portrayed in the press … He did say any of the GOP candidates would be better than President Barack Obama … “That (hope and change) was an empty vessel filled by the people that voted for him — their hopes and dreams,” Johnson said.

Is this political indoctrination allowed by Oakfield school administrators?

McCarty is no stranger to politics. In 2004, McCarty was elected to the Campbellsport Board of Education at the age of 21. He ran an unsuccessful bid for the Assembly in 2008.

If that weren’t bad enough, McCarty trucks his students to Republican sideshow circuses.

jsonline: Call this story Oakfield High School's Excellent Republican Adventure. In a whirlwind trip to Iowa, seven students and two recent graduates of the school, shepherded by teacher Karl McCarty and a father of two in the group, drove six hours from Oakfield to Des Moines, met top GOP candidates and got catbird seats for a presidential debate - making national TV in the process - Who won the debate? McCarty, who describes himself as an independent conservative, thinks it was Rep. Ron Paul - though he added that Rep. Michele Bachmann stuck well to her message.

This isn't the first Iowa trip he's made with students this year, said Everett O'Malley, one of the seniors along for the ride. A smaller group went in October to the Faith and Freedom Coalition forum in Des Moines and met many of the GOP candidates there.

No, it’s not alright for this right wing indoctrination to occur. I mean really, after the outrage over President Obama’s yearly school pep talk broadcasts, they have the balls to do this?
Posted by John Peterson, Democurmudgeon at 2/21/2012 04:57:00 PM