Rabid Support for Failure; Walker supporters know something we don't?

Abuse of power is fun, if you happen to be the one in power. Is that why Scott Walker supporters don't seem worried about the six months of job losses, the most in the country? The bar is always lower for these tightwad voters. These "we'll just vote for Walker again" masochists have redefined the term double standard. The graphs below offer an insight into their Bizarro World existence.

The pictures tell the sad story; Walker supporters don’t care much about actual results, which they’ll wait endlessly for, but instead want a one party system of authority that is their alone. These are tea party losers to boot. 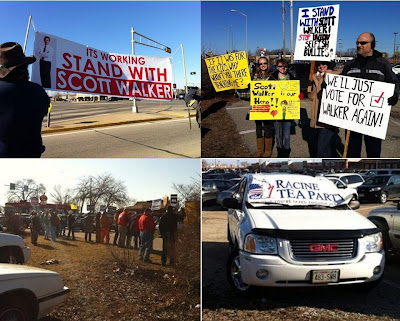 From what I can see in the photos, there can't be any more than 30 or 40 people at the protest, yet this report in the Waukesha Patch claims a massive 200 attended. Even if each corner of the intersection had a similar number of protesters, 40 would still be about right.

Nancy Milholland, a coordinator for the Racine TEA Party, asked supporters to come out to the corner of Highways 31 and 20 in Mount Pleasant…About 200 supporters, many of them from counties outside Racine, held signs touting their support for Walker and Wanggaard…Linda Johnson of Raymond holds a sign about supporting teachers because she thinks collective bargaining does more harm than good. "We want the most qualified teachers to not be used by the union," she said.

Thanks for saving our best teachers from...the unions? And that's not supposed to sound crazy?