So where are the promises to roll back the last year of the Walker administration? If we had heard one threat, one promise to repeal any particular proposed bill, you would think the other side might moderate a little? Forget it.

We've moved so dramatically right in this state, that a total flip of power would never bring us back, even just a little. Democrats typically don't have the balls to pass their own agenda. I wonder what'll it take to breath some life into these people when they do control state government. Look at the radical list of lost rights passed by these corporate thieves: 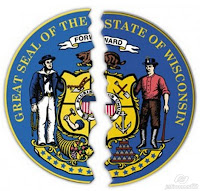 Channel3000: The Wisconsin state Senate has passed a bill that would remove a requirement in state law that voter registration be offered to students in high school … saying high school students have many other options for registering and it's a burden for elections officials to offer it at the schools. pointed out testimony from the Fond Du Lac County Clerk pointing out a situation in which 80 students at a local high school registered to vote, but only five ended up voting. Sen. Jon Erpenbach, D-Middleton, retorted by saying "So what?"

josonline: A Racine County man couldn't vote Tuesday after poll workers refused to accept his U.S. Veterans Administration card as a qualifying photo ID. Gil Paar, 69, of Mount Pleasant, told the Racine Journal Times that he has a state driver's license he could have shown, but instead just declined to vote. “Basically I was trying to make a point,” Paar told the newspaper. “I gave them four years of my life, why shouldn’t I be able to use my vet’s card?”

Jsonline: The Assembly approved major changes to wetlands regulations to ease restrictions over development in Wisconsin … current law hamstrings development. The aim was to balance environmental interests and the rights of property owners … developers would not be required to look for suitable sites elsewhere. It also establishes a balancing test that evaluates the economic and environmental effect of a project. Advocates of the bill say the changes would allow the DNR to spend more time on complicated projects.

The Assembly has concurred in a bill that would, in part, eliminate damages in employment discrimination cases.