Wisconsin Second Highest Unemployment Claims in Nation. But the business climate is improving...?

Although these number are preliminary, Wisconsin's new "Open for Business" slogan is starting to fit right in with the conservative's "opposite day" philosophy. From the Wisconsin State Journals liberal online paper the Capital Times (guess this kind of news doesn't warrant the importance of ink and paper): 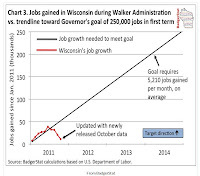 The U.S. Bureau of Labor Statistics on Thursday released a report showing Wisconsin with the second-highest number of unemployment claims from mass layoff events in the nation last month … any event affecting at least 50 workers … for November … 90 such events in the month, impacting 9,359 individuals. Only California, with an estimated 274 events affecting 19,677 individuals, had more initial unemployment claims from mass layoffs. A full listing of mass layoffs and plant closings in Wisconsin is available here … the ongoing cutbacks suggest the state labor picture remains clouded heading into 2012.

But what about Madison, the liberal socialist area of our state? While Gov. Walker is shifting the seat of government to Waukesha County, how's the old Capitol city doing?

A separate report from the BLS shows the Madison metropolitan statistical area (MSA) with the second-lowest unemployment rate among metropolitan areas, at 5.1 percent for October. The Madison MSA includes Dane, Iowa and Columbia counties.

In another report, the BLS is showing the Madison area with 350,200 nonfarm jobs in October, just about 1 percent fewer jobs than 10 years ago. Madison's job performance was ninth best in the nation over the past decade among the nation's 100 largest metro areas.

The Milwaukee metro area, which also includes Waukesha and West Allis, ranked 39th in the nation. It has almost 4 percent fewer jobs than 10 years ago.