The End of America?

While we watch in real time the authoritarian takeover of Wisconsin, Michigan etc, the Senate and the House have been working to allow the final takeover, a law tht would allow these same conservative overlords (if they became president) to very easily turn the U.S. into a despotic nation. Liberals, Democrats, protesters and the general public would be locked up and herded off into camps.
This kind of scenario was always the rhetoric of militant right wingers, but after what we've seen nationwide by Republican governors, legislators and their presidential candidates, even liberals like myself are beginning to give in to the same paranoid visions. The real threat of authoritarianism. Check out this summation, from the Huffington Post: 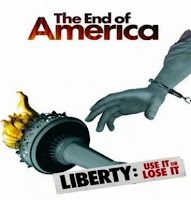 The 2012 National Defense Authorization Act, if signed into law, will signal the death knell of our constitutional republic and the formal inception of a legalized police state in the United States. Passed by the House on May 26, 2011 (HR 1540), the Senate version (S. 1867) was passed on Dec. 1, 2011. Now only one man -- Barack Obama, a scholar of constitutional law -- will make the decision.

First, let's be clear what is at stake. Most critical are Sections 1031 and 1032 of the Act, which authorize detaining U.S. citizens indefinitely without charge or trial if deemed necessary by the president. The bill would allow federal officials to take these steps based on suspicions only, without having to demonstrate to any judicial official that there is solid evidence to justify their actions. No reasonable proof will any longer be required for the government to suspend an American citizen's constitutional rights. Detentions can follow mere membership, past or present, in "suspect organizations." Government agents would have unchecked authority to arrest, interrogate, and indefinitely detain law-abiding citizens if accused of potentially posing a threat to "national security." Further, military personnel anywhere in the world would be authorized to seize U.S. citizens without due process. As Senator Lindsay Graham put it, under this Act the U.S. homeland is considered a "battlefield."

What is a stake is nothing short of the basic fundamentals of western jurisprudence. Central to civilized law is the notion that a person cannot be held without a charge and cannot be detained indefinitely without a trial. These principles date back to Greco-Roman times, were developed by English common law beginning in 1215 with the Magna Carta, and were universalized by the Enlightenment in the century before the American Constitution and Bill of Rights were fought for and adopted as the supreme law of the land.

For more than two centuries of constitutional development since then, the United States has been heralded as the light to the world precisely because of the liberties it enshrined in its Declaration of Independence and Constitution as inalienable. At the heart of this Act is the most fundamental question we must ask ourselves as a free people: is 9/11 worth the Republic?

Now comes the 2012 NDAA, the coup de grace for a democratically voted metamorphosis from republic to national security state. It puts the final nail in the coffin of the Constitution by designating the entire United States as essentially the same "battlefield" in the war on terror as Iraq or Afghanistan, and authorizes the executive branch and the military to take whatever actions they consider legitimate against any human being anywhere on planet earth, civilian or enemy combatant, and to do so without any judicial oversight or constitutional constraint. If this Act is passed, the Bill of Rights will no longer protect American citizens from their government. The Constitution will no longer be the ultimate law of the land.

The House and Senate versions of the Act must now be reconciled and the Act sent to the president to either sign or veto. With his decision, he will determine the fate of those very liberties which, up to this point, have been integral to and indeed have defined America.

Jim Garrison is President, State of the World Forum and Wisdom University; Author, 'America as Empire'

Just as eye opening, the ACLU wrote their own analysis here!!!