Conservatives continue to blame their own faults on everyone else. The following story about GOP voter ID laws is a shining example: 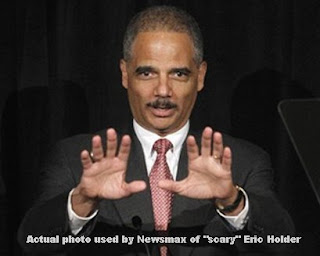 Gaffe-prone Attorney General Eric Holder came under new Republican fire on Wednesday after calling for an end to state laws requiring voters to show identification at polling stations. Sen. John Cornyn of Texas immediately slammed Holder, saying: "Voter identification laws are constitutional and necessary to prevent fraud at the ballot box. "Facing an election challenge next year, this administration has chosen to target efforts by the states to protect the democratic process," Cornyn said.

The fact that voter fraud has statistically been proven to be a myth, that fact alone has never been a major part of the voter suppression story. Newsmax continues:


The conservative protesters, who had traveled from all over Texas, claimed that there is no need for government interference on voting.

But Republican "government interference" is the reason so many states have suppressed the vote. It brings to mind the sign “Get your government hands off my Medicare.” And whoa unto those who criticize voter suppression:

And in a thinly veiled attack on Republicans, Holder said he was calling on political parties “to resist the temptation to suppress certain votes in the hope of attaining electoral success and, instead, achieve success by appealing to more voters.”

Is there really anyway to deny the truth in that statement? But projection rules the day:

Hans von Spakovsky of the Heritage Foundation told the Post that Holder’s stance is based on “ideology and politics.”